10. Galactus: Galactus isn’t so much a character as he is a concept, but what a concept: a leftover from the universe that existed before our current one, Galactus is tasked with keeping the forces of entropy and creation in balance by eating planets. That’s right, he eats planets. Pretty cool, huh? Fun Galactus fact: he appears to each race differently, so when Earthlings see him he looks like a big dude with a funny helmet and a big G on his belt, but when Skrulls or some other race see him, he looks totally different. 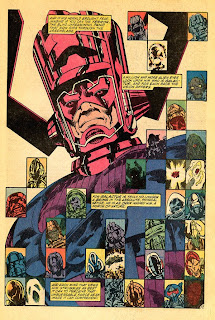 9. Thor: Thor is the character that most directly connects my love of mythology with my love of comic books (not that the comic book Thor is anything close to his Norse mythology counterpart). Plus, Thor has some of the greatest comic book dialogue ever, with his Shakespearean “thous” and “forsooths”, that can either be hilarious or a portent of ass-kicking to come: 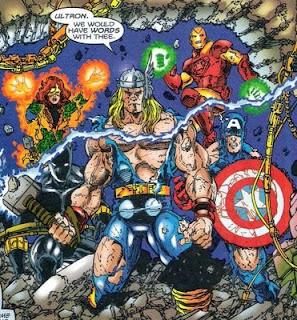 8. J. Jonah Jameson: Perhaps Spider-Man’s greatest villain (and I didn’t vote for Spider-Man despite my love of the character because I figured he had enough help. And he did, finishing quite high in the voting when all was said and done) and in best villain fashion, isn’t wholly evil. Deep down, whether paying scientists to create Spider-Man hunting robots or slamming his desk with his patented desk-pounding action, JJJ is a pretty righteous and fair-minded person (except where Spider-Man is concerned).

7. Captain America: Captain America is Marvel’s answer to Batman: the guy who will always, no matter how overmatched he may be, find a way to win. I also like his moral fortitude, a soldier who killed enough during war to vow never to kill again as a super hero.

6. Captain Marvel (Genis-Vell): Son of the original Captain Marvel, bonded to professional sidekick Rick Jones, driven insane by cosmic awareness, Genis made this list on the strength of his Peter David-penned title alone (a run I criminally forgot about when compiling my votes for the 100 Top Runs poll).

5. Kang the Conqueror: Kang represents one of my favorite sci-fi comic book tropes: time travel. Kang grew up in the 30th century, a boring, idyllic era of peace. Bored and yearning for conquest, Kang invented a time machine, traveled back to ancient Egypt, and ruled as Pharoah Rama-Tut (at which point he fought a time-traveling Fantastic Four). On his way back to the 30th Century, he encountered Dr. Doom. Believing himself to be a descendant of Doom (Kang is actually a distant descendant of the FF’s Mr. Fantastic) and inspired by Doom’s armor, when Kang’s time machine accidentally deposited him in the now barbaric, war torn 40th century, he crafted a suit of technological armor for himself and conquered that era. Bored once again, he traveled back to the 20th Century to battle super heroes, principally the Avengers. Eventually, Kang will become so bored with conquest that he returns to Egypt and rules as Rama-Tut again, this time benevolently (even helping the Avengers in battle against his past self) before becoming the caretaker of Limbo (a realm in which time has no meaning) as Immortus, a fate which is so abhorrent to Kang that he fights tooth and nail to prevent himself from becoming his future selves. And that’s the just tip of the awesome, headache-inducing iceberg that is Kang (don’t even ask about the time he used Ms. Marvel to give birth to himself).

4. Magneto: With Magneto, it’s not the ends with which you disagree; it’s the means of getting there. He wants the same thing the X-Men do (a safe world for mutants) he just believes mutant supremacy is the way to go about it. My favorite take on Magneto was Claremont’s portrayal of him from about Uncanny X-Men 150 to his death in X-Men (vol. 2) 3. It was then that he really developed away from the ranting megalomaniacal Silver Age villain and become someone willing to try the X-Men’s way before deciding he was right the first time, that his way of violence and supremacy was the only way, and you found yourself almost agreeing with him.

3. Cable: Cable personifies the greatest excesses of comics in the early 90s (the time I first started reading them): he was grim and mysterious, with a take-no-prisoners attitude, a cryptic past and untold connections to numerous characters. Reading those stories back then I always felt like something big was just around the corner, just one more mysterious clue away. And Cable, in many ways, represents that time (of course, I now realize that feeling was intentionally generated by the creators to keep me reading (and buying) as much as possible, and was often made up by the seat of their pants. But still, I remember the time fondly). So add to that nostalgia the fact that Cable’s a time traveler with a story so convoluted it puts Kang’s to shame and that the answer to all those mysteries was that Cable was Cyclops infant son who was sent to the future after being infected with a fatal (for that time) techno-organic virus, grew up in the future, then returned to the past to stop his future from occuring, and you’ve got a character who places pretty high on my list. 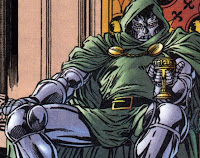 2. Dr. Doom: Doom is a textbook example of the perfect comic book villain: a benevolent dictator who just might make the world a better place if he was in charge, a genius who could greatly improve the quality of life if not for petty jealousies. He’s loud, bombastic and over the top yet still menacing and a genuine threat.

1. Cyclops: Everybody already knows all about my man crush on Cyclops…