It has come to my attention I haven’t been as leisurely as expected when joining this blog. In my defense, the title above says “Two” guys waxing philosophical on comic books, sports, movies, and the numerous other activities that make us gentlemen of leisure. I’m the third and therefore consider myself somewhat of a guest star brought in to shake things up. I am a certified geek though. So to show I am just like the other writers and readers, here are my top ten comic book characters. 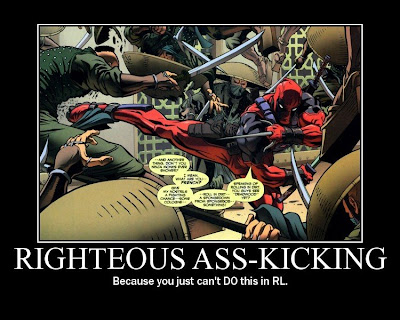 10 - Deadpool - Wade Wilson - The Merc with a Mouth. Deadpool’s personality and attributes are an amalgam of some of comics’ best characters. He’s got the witty banter of Spider-man without all that wasteful morality (which Spider-man himself doesn’t seem to have anymore seeing he made a pact with Mephisto, Marvel’s “SATAN”. The main reason Peter Parker is not on my list.) He has the fighting ability of Batman, an origin and healing factor similar to Wolverine, the face of Dr. Doom & Snake Eyes. While written by Joe Kelly, he displayed a proficiency in pop culture references, “comic awareness”, and laugh out loud humor mixed with moments of complete prick-ness. Deadpool wasn’t a cliché or a stereotype. He was a well-rounded character you could easily either love or loathe. 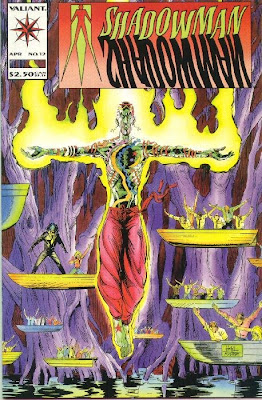 9 - Master Darque – Before constant cover gimmicks, and Aerosmith appearances, Valiant Comics re-imaged and created some unique and realistic characters such as this master of Necromancy and Voodoo. Master Darque had all the traits of an epically evil villain and one of the greatest visual designs of any comic character. Unfortunately, hack writers and bad plots quickly turned the master of the dark arts into a joke. Before that, Master Darque made a hippy’s head explode with the dark power of Charlie Parker music. That’s frickin’ evil brilliance!

8 - 8-Ball – Here’s a guy who is a perfect example why I love comics. It’s a medium where a character can be created with a pool ball as a helmet and the reader won’t think twice about him going on a crime spree with a super engineered cue stick while traveling in a hovercraft shaped liked a pool rack. 8-Ball didn’t make many comic appearances, but he made a lasting imprint on my psyche. 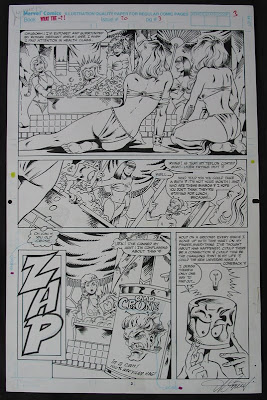 7 - Forbush Man – Between the ages of birth and dating, I spent all my money and most of my time reading comics. “What The--?!” introduced me to the art of parody. Great characters spoof such as Spider-Ham and Moanin’ the Bavarian showed me comics could make me laugh just as much as television did. With Forbush Man, I connected on a deeper level than the character was probably intended. He was a kid just like me, running around with a kitchen pot on his head, pajamas, and a sheet tied as a cape, having fantastical adventures. These were the kind of things I used to do when I was six, living in an imaginary world in my head where the possibilities were endless yet I rarely left my living room or back yard. Forbush Man channeled the essence of Bugs Bunny but did look nearly as good in a dress. 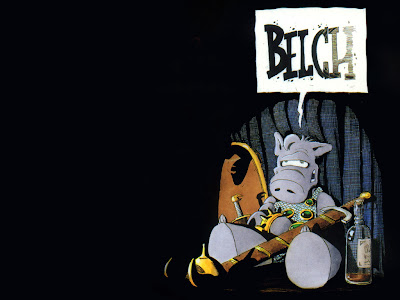 6 - Cerebus – He’s an aardvark who went from adventuring barbarian to politician to pope to recluse to Dave Sim’s character he sometimes drew between rants on Oscar Wilde and whatever-the-frick Dave Sim believes (after Church and State II, the series took a huge nosedive, in my opinion). He drank, womanized, kicked ass, drank some more, got manipulated by everyone, and ended up dying alone after 300 issues. I really thought Dave Sim was going to kill himself after the series ended but that ‘s beside the point.

5 – Death – Everyone envisioned the angel of death as a skeletal reaper with few words and much foreboding. Then Neil Gaiman created “The Sandman’s” older sister as the girl everyone would love to meet. She’s perky and fun loving and always seems to be the most sensible “personification” in any situation. She quickly became a Goth mascot and gave me an idea of what GOD may be like.

4 – Snake Eyes – He’s a ninja who would whoop Batman’s ass! He had a timber wolf for a pet and a collection of spiked knuckled trench knifes. The first comic I ever bought was G.I.JOE number 97. Snake Eyes was the coolest character in the comic or the cartoon. While growing up I wanted to be either the Dread Pirate Roberts or Snake Eyes. 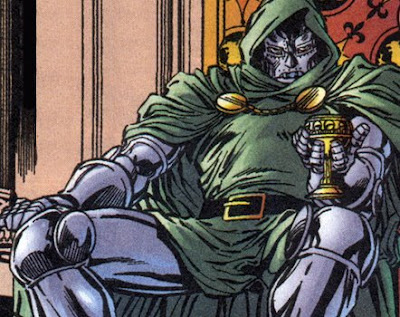 3 - Dr. Doom – the ultimate villain because he genuinely believes he is doing the right thing at all times, even while obsessing over the dastardly Richards! Bah! 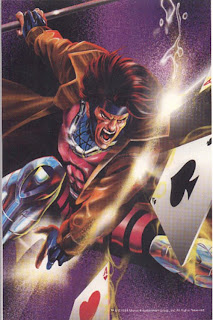 2 - Gambit – Puberty hit me quite early and Gambit had a way with the ladies I envisioned I could emulate. Unfortunately, I didn’t have his abilities or cliché Cajun charm. My first encounter with Remy was Uncanny X-men 273 where he kicked Wolverine’s ass in a danger room session. I would ride my bike around my neighborhood imagining it was a motorcycle and I was on my way to pick up Rogue for a date. I was 12 and a dork, still am.

1 – Madrox – Multiple Man. Multiple Man. Doing the things a multiple can. Peter David tapped the full potential of Jamie Madrox and his ability to make duplicates of himself, a personal cloning factory. The multiple personalities and various “experiences” one could have with one self were explored throughout X-Factor and his mini-series. If David is writing a story with Madrox in it, I will be reading it.
Newer Post Older Post Home
Posted by boots~ at 3:56 PM