Not Playing by the Rules! 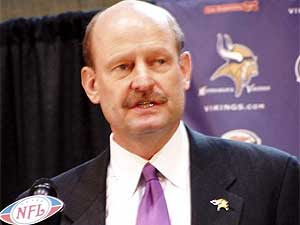 Vikings Head Coach Brad Childress admitted to not knowing the rules of football on Monday, October 1st during his weekly news conference.
"I know yesterday didn't work out well," the coach lamented referring to the Viking's 16-23 loss to their division rival Green Bay Packers, "but I'm just getting acclimated to the real rules of football." After the statement Coach Brad Childress realized what he just said, went red with embarrassment, and quickly stopped talking. After being pressed by various reporters the coach finally gave in and told the entire story.
"Well, everyone knows I didn't actually do anything in Philadelphia." The coach cleared his throat before continuing. "I mean, Andy Reid called all the plays there. I was just used to deflect the scorn from those ravenous Philadelphia fans from Reid to me. Heck, you throw an incomplete pass there and they want to rip your head off. Anyway, I got a call from Zygmund Wilf and he said he wanted me to be the head coach of the Vikings! I figured head coaching couldn't be too hard, right?" A rumbling of disbelief by all those present became audible.
"So I got here," Brad continued, "and I realized that I didn't have an NFL rule book. Well, I figured I could just ask to borrow one from another team. Since Wisconsin is right next door I couldn't see why the Green Bay Packers wouldn't want to help out their neigbor to the west, right?" Now the audible rumblings turned into outright laughter.
"Anyway," Brad Childress tried to bring order back to the room, "after the loss to Kansas City I shook Coach Herm Edwards' hand. I told him that things might have been different if the NFL didn't have that stupid rule about forward passes not exceeding 15 yards."
At this point a Vikings Representative tried to cut the news conference short. Brad shooed him away saying he needed to get this off his chest.
"So Herm Edwards looked at me like I was an idiot and said that there's no rule like that. A pass can be thrown any distance. I checked into it and found out that I had been bamboozled by the Packers. For over a year I've been using a doctored up rule book!"
A lot of media reporters nodded silently to themselves at the news. It seemed to explain a lot. 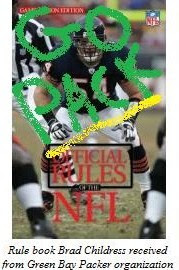 "But now I got the real rule book and there's going to be some changes. Just today I learned that the offensive line can actually block all players who are rushing the quarterback. I always thought you had to let at least one defender by to have a free shot at the passer." Coach Childress then added excitedly, "Oh! And next year I now know I can sign free agents that people have actually heard of!"
When asked if there are any rules in the real NFL rule book that Brad Childress didn't like the coach came up with a few.
"Well, I really wish they'd get rid of the rule about teams being named after Scandinavian Seafarers not being allowed to score more than 16 offensive points in a game. It seems to be unfairly targetting the Vikings." The audience snickered again. "Oh, and the limit on the number of downs a rookie running back can play is also a bit annoying."
Upon hearing this one reporter asked if the Green Bay Packers also gave Coach Childress this new rule book.
"No way," Head Coach Brad Childress said dismissing the question. "What do I look like, an idiot? I got the new rule book from the Chicago Bears."
Newer Post Older Post Home
Posted by Dr. Bitz at 10:35 PM

Email ThisBlogThis!Share to TwitterShare to FacebookShare to Pinterest
Labels: Vikings