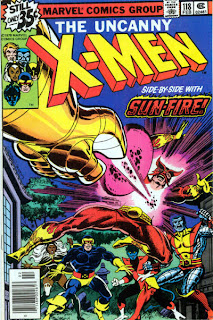 "The Submergence of Japan"
February 1979

In a Nutshell
The X-Men team-up with Sunfire against Moses Magnum's Mandroids.

Plot
Six weeks after being rescued by the crew of the Jinguchi Maru, the X-Men arrive in Japan, only to find the city of Agarashima in flames following a devastating earthquake. With the ship unable to dock due to the condition of the port, the X-Men make their own way ashore. Lacking any proper identification or passports, they head to Sunfire's home, doing what they can to help people caught in the aftermath of the quake along the way. Wolverine reads a news report which suggests there is something unnatural about the earthquake. Arriving at Sunfire's manor, they find the former X-Man in conference with several high ranking government officials, including the Prime Minister, as well as Misty Knight and her partner Colleen Wing. Sunfire is reluctant to accept the X-Men's help, but they are invited inside at the request of the Prime Minister. 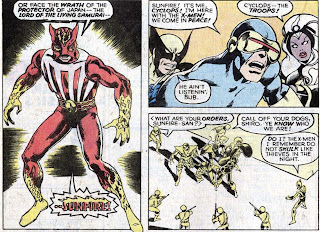 Meanwhile, Cyclops calls the mansion only to learn that all the line have been disconnected, not knowing that Professor X and Lilandra are orbiting the planet, preparing to depart for the Shi'ar Empire, while outside a group of men prepare an attack. Wolverine, wandering the grounds, meets Sunfire's cousin Mariko just as a localized earthquake hits, forcing everyone to flee outside just as a group of armored Mandroids attack, intent on kidnapping the government officials. The X-Men and Sunfire beat back the attack, but a hologram of Moses Magnum appears from one of the damaged Mandroid suits. He demands to be declared absolute ruler of Japan within 24 hours, or else he'll use his power to sink the country.

Firsts and Other Notables
This issue is the first appearance of Mariko Yashida, Sunfire's cousin. She will become a fairly significant supporting character throughout Claremont's run, most notably as Wolverine's ongoing love interest. 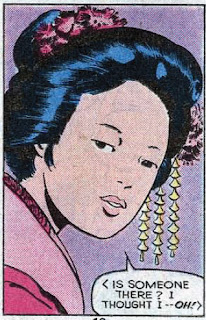 Wolverine's past association with Japan is also established for the first time, as its revealed he spent time there when he was younger, and can read and speak Japanese.

The villain of the piece is Moses Magnum, a D-lister who first appeared in Giant Size Spider-Man 4. Claremont later used him in a Power Man annual before his appearance in this story. He'll pop up in a few stories scattered throughout the Marvel Universe over the next several decades, but has never risen to much prominence. 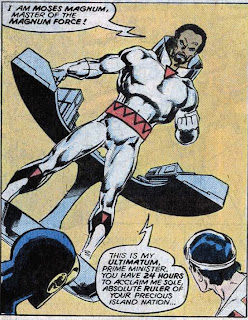 His lackeys in this issue attack the X-Men wearing Mandroid armor, battle suits designed to counter the powers of the Avengers, first deployed against that team by the government during the famous "Kree-Skrull War" story arc. 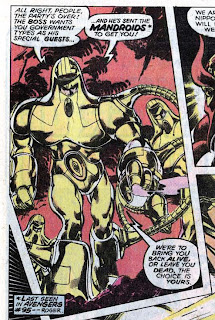 Sunfire makes his first appearance in the book since angrily quitting the team in issue #94.

A Work in Progress
It's noted that the X-Men have spent six weeks aboard the Japanese ship, and that Cyclops led them in rigorous training sessions throughout that time.

As proof of this, Nightcrawler demonstrates his ability to teleport from the ship to the shore in one jump, without being winded, something he claims he wouldn't have been able to do weeks ago.

Colossus has become aware of his recent relative ineffectiveness in battle, wondering why he even bothers, shortly before getting blasted out of the battle by a Mandroid. 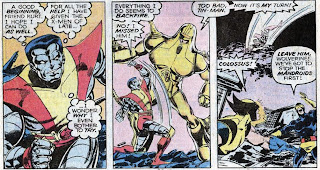 Once settled at Sunfire's estate, Cyclops phones the mansion, only to find the number has been disconnected by Xavier, as has the emergency direct line to Cerebro.

Misty Knight, last seen bumping into Phoenix at the airport en route to Japan, is helping the Japanese government deal with Moses Magnum, along with her partner Colleen Wing. This opens up the first serious crack in the "the world thinks the X-Men are dead" plot, as at no point does Misty ever mention seeing Jean alive, nor does Cyclops ever mention to Misty his belief that Jean is dead, despite Misty having been Jean's roommate (and despite thinking about how he still doesn't feel anything about Jean's death while talking to Misty). 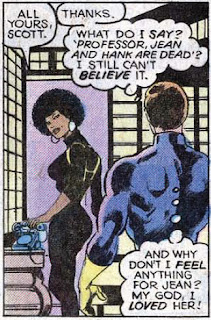 That 70s Comic
Cyclops expresses surprise at Wolverine reading a Japanese newspaper once they arrive in Japan. So apparently, the fact that Wolverine knows Japanese never once came up during the six weeks the X-Men spent aboard a Japanese ship. 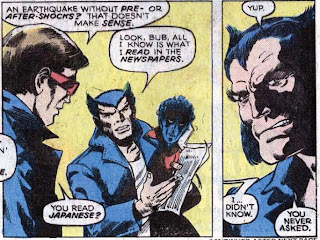 Moses Magnum's whole plan of "declare me ruler or I'll use earthquakes to destroy the country" is pretty much straight out of page four of the Super-Villain Handbook.

Claremontisms
Claremont once again comes up with a new and innovative way for the characters' to use their powers, as Cyclops hits one of the Mandroids with a pulsed optic blast, setting up a specific vibration pattern in the armor. Then Banshee hits it with his sonic scream, which counters "Cyclops' optic pulse on a fractionally different vibration frequency...the two opposing patterns creating such titanic molecular stresses that the armor literally shakes itself to bits." Read it too closely and it sounds like gibberish, but on the surface, it's comic book science at its finest.

Young Love
Upon meeting Mariko, Wolverine is immediately smitten, establishing for the first time his long-standing taste in Asian women. 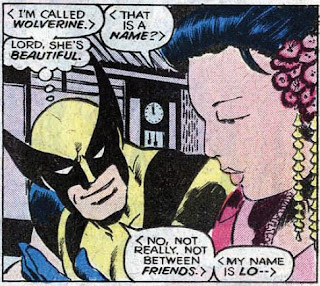 For Sale
Be sure to brush up on your Micronauts before their crossover with the X-Men! 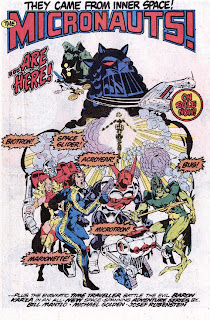 I'm not entirely sure what this Kiss ad is selling (an album, presumably), but its the first Kiss ad to appear in an X-Men comic thus far. 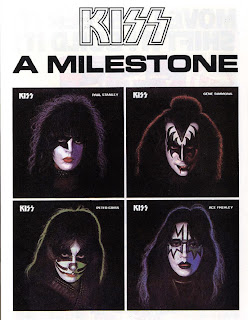 John Byrne on the introduction of Mariko
"I felt that [Wolverine] needed something delicate and fine to just counterbalance it. And rather than introducing a character in the X-Men or a member of the X-Men and add those qualities I thought I would introduce a girlfriend. And when we went to Japan I'd just finished reading Shogun the concept of a perfect geisha was exactly what I was looking for - this tiny doll-like creature, all frail with exactly the kind of things that would push all the buttons for Wolverine."

Teebore's Take
The X-Men arrive in Japan and meet up with Sunfire as the Thomas/Adams retrospective continues (though Adams didn't draw the issue of X-Men which introduced Sunfire, Thomas wrote it, and its generally considered part of their run). This issue is most notable for being another significant step in the development of Wolverine's character, as his connection to Japan is revealed and he meets Mariko for the first time. The later marks the beginning of a relationship that will last, in one form or another, until shortly after Claremont's departure in 1991. As Byrne notes, the dichotomy between the berserker Wolverine, always fighting to stay in control, being attracted to the demure, controlled, almost doll-like Mariko, is thematically strong, and helps add extra dimension to Wolverine's character. In just eleven issues, Claremont/Byrne's Wolverine has already become a far different character than the loud-mouthed braggart who got humorously knocked out of every fight at the beginning. He's not quite the character who will become the breakout star of X-Men yet, but this issue brings him another significant step closer.
Newer Post Older Post Home
Posted by Austin Gorton at 8:00 AM