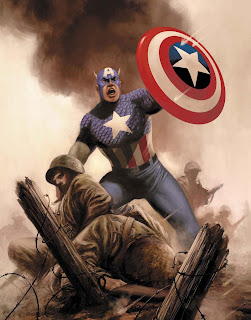 Powers and Abilities
Thanks to the Super Soldier serum, Captain America's strength, speed, agility, endurance and durability have been heightened to the highest levels possible for a normal human. He also possesses an indomitable will, extreme determination, and an inner nobility.

Captain America is also a highly skilled military strategist and tactician, and through years of training and practice can hurl his shield with unerring accuracy in such a way that it ricochets back to him. He is arguably the best hand-to-hand combatant in the Marvel Universe. 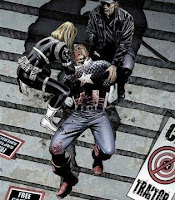 Gadgets and Accessories
Captain America wields perhaps the most notable accessory in the Marvel Universe, his unbreakable shield, made from an unknown alloy of steel and vibranium

Cap has used other shields on occasion, including his original triangular steel shield, a pure-vibranium version of his regular shield, and a photonic energy shield.

His uniform is made of fireproof material and he wears lightweight scale armor. He's also used a S.H.I.E.L.D-modified motorcycle and battle van.

Movies and Appearances
Captain America was a headliner in the Marvel Superheroes cartoons of the 60s, featuring a fantastic opening theme song.

In the early 90s there was a terrible Captain America movie starring J.D. Salinger's son, which featured an Italian Red Skull and rubber ears attached to Cap's cowl. 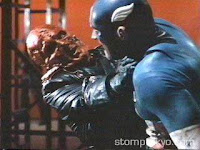 Currently, Captain America is a featured player on the excellent Avengers: Earth's Mightiest Heroes cartoon and is being played by the Human Torch in his feature film debut. 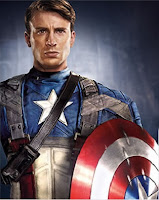 One-Sentence Origin
When sickly Steve Rogers is deemed unfit for military service following the outbreak of World War II in Europe, he volunteers for an experimental procedure which grants him enhanced abilities, allowing him to take the fight to the Nazis as Captain America. 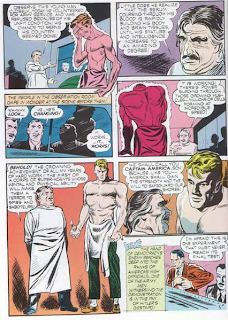 Memorable Moment
Avengers #4, March 1964: The newly formed Avengers discover Captain America frozen in a block of ice, locked in suspended animation thanks to the Super Soldier serum, bringing the hero of World War II into Marvel's modern age of heroes.

Fun Fact
Captain America is the one of the few people deemed worthy enough to lift the hammer of Thor. 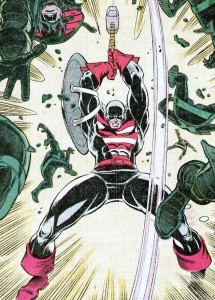 Teebore’s Take
In many ways, Captain America is a lot like DC's Superman, in that he's a character whom other characters all look up to. Captain America is the gold standard for heroes in the Marvel Universe, respected by everyone from Iron Man to Wolverine to the Punisher. Even some villains and cosmic beings have been shown to respect him. For me, Captain America is a lot like Batman, in that both characters possess an indomitable will. No matter the opponent, no matter the odds, both characters will find a way to win, no matter what. As a result, some of the best Captain America stories are the ones where he faces a seemingly insurmountable situation, simply to see how the relatively down-to-earth Cap will find a way out of it.

Captain America is also one of Marvel's oldest characters, his history stretching all the way back to the Golden Age of comics, when Marvel was known as Timely and comics sold in the millions. Created roughly a year before the US entered World War II following the attack on Pearl Harbor, Cap was intended from the beginning to be a symbol of American idealism in the face of European fascism, and famously appeared knocking Hitler cold on the cover of his first appearance. Though America at the time remained divided over further involvement in what was still considered a European war, Captain America was part of a large wave of patriotic heroes that filled the pages of comic books at the time. If America still wasn't sure what she thought about the Nazis, the many European emigrant and Jewish comic book creators at the time made no secret of their position. 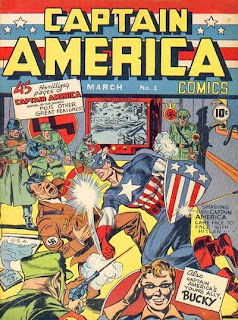 Since then, stories featuring Captain America have often reacted to the political zeitgeist of the times while still managing to depict pulse pounding super hero action. In the wake of Watergate, Steve Rogers was caught up in an adventure which forced him to question his ideals and his role as a symbol of America, leading him to quit being Captain America for a time. He quit again in the 80s, as government bureaucracy threatened to make him beholden to a specific government's policy rather than the greater ideals of the country. And following 9/11, Cap entered a phase in which he fought for his beliefs and his country harder than ever. Through seven decades of publication, Captain America has remained a steadfast symbol of the American dream, as well as a Nazi-punching, Fascist-smacking fighting machine. 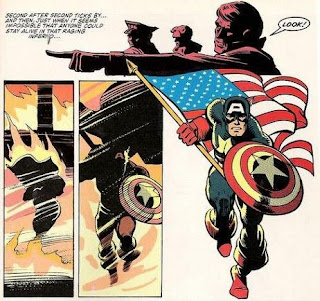