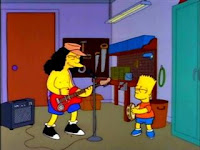 The Setup
Following a Spinal Tap concert, Bart takes up guitar, and when Otto proceeds to rock out on it and deliver the kids to school late, he is fired, prompting Bart to offer him a place to stay.

Notable Notes
This is the first (and to date, only) episode to feature Otto prominently, as the show continues to develop its supporting cast and figure out who works better than others. Otto's last name (Mann) is revealed as well.

Spinal Tap guest stars, and like the film This is Spinal Tap they are presented as though they are a real band. In fact, this episode being my first encounter with Spinal Tap back when it originally aired, I went years thinking they were a real band with which I just wasn't terribly familiar.

Favorite Quotes
Derek: I can't think of anyone who's benefited from the fall of Communism more than us.
Nigel: Oh, maybe the people who actually live in the Communist countries.
Derek: Oh yeah, hadn't thought of that.

Kent Brockman: Tonight, the city weeps, as for the first time ever, a hockey arena becomes then scene of violence...Of course, it would be wrong to suggest this sort of mayhem began with rock-and-roll. After all, there were riots at the premiere of Mozart's "The Magic Flute". So, what's the answer? Ban all music? In this reporters opinion, the answer, sadly, is `yes'.

Otto: Please let me stay here. I've got nowhere else to go!
Homer: Forget it! That line didn't work for my dad, and it's not going to work for you!

Homer: Hey, how come you never play your guitar any more?
Bart: I'll tell ya the truth, Dad. I wasn't goot at it right away, so I quit. I hope you're not mad.
Homer: Son, come here! Heh heh heh. Of course I'm not mad. If something's hard to do, then it's not worth doing! You just stick that guitar in the closet next to your short-wave radio, your karate outfit and your unicycle, and we'll go inside and watch TV. 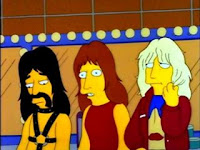 Teebore's Take
This is an oddly structured episode. It's ostensibly about Otto moving in with the Simpsons, and the subsequent antics which ensue, but the episode doesn't get to that point until halfway through the second act, well after Bart attends a Spinal Tap concert, decides to learn how to play guitar, then quits when he's no good at it. By that time, there's not much episode left to deal with the inevitable conflicts Otto's presence in the house triggers, the resolution of his suspension from bus driving (because we have to get back to status quo by the end) and a small subplot involving Principal Skinner driving the bus. As a result, the first half of the episode is the strongest (Bart's fantasies of becoming a washed up, strung out rocker are probably enough to drive an entire A plot), while all the Otto stuff comes off as forced and half-formed. Or maybe it's just that Otto isn't the most dynamic or interesting of characters.

While not a bad episode, other than shining a rare spotlight on Otto, this episode is rarely referenced and often overlooked, which is pretty much the exact opposite of a classic. 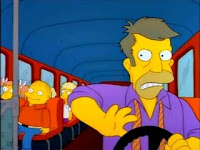