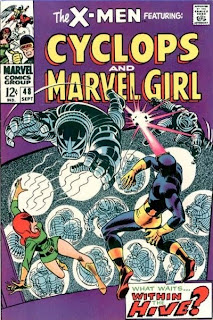 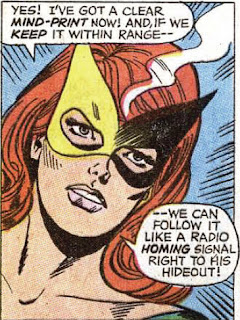 Using Marvel Girl's telepathy, the pair is able to track the robot and find a tunnel leading to Computo's underground Hive. They observe Computo "recycle" the remaining Cybertron for his failure when suddenly they are detected. Computo releases the entire Hive of robots and sends them to attack the X-Men. Cyclops and Marvel Girl hold them off, and then Cyclops blasts Computo directly, revealing the machine's true master, Quasimodo, and  forcing the villain to flee. In the process, Quasimodo floods the underground chamber and escapes. Thanks to Marvel Girl's telekinesis, the two X-Men survive the flooding and make it to the surface, where they seal off the tunnel.

2nd Story: Yours Truly, the Beast
Beast's mutant powers and his variety of personal interests, from science to engineering to arts and literature, are detailed. 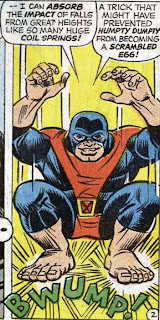 Firsts and Other Notables
Arnold Drake comes aboard as the book's new regular writer. Principally remembered as a DC guy, Drake is most known for creating DC's Doom Patrol, a book which premiered within months of X-Men back in 1963 and also features a team of outcasts lead by a mentor in a wheelchair who fight a Brotherhood of Evil. All similarities, it seems, are purely coincidental, though it is kind of fun that Drake ended up working on both series.

Computo is just a big robot which creates smaller robots to do its unrevealed bidding. The villain behind Computo's curtain is Quasimodo the Living Computer, a little-known Fantastic Four villain. 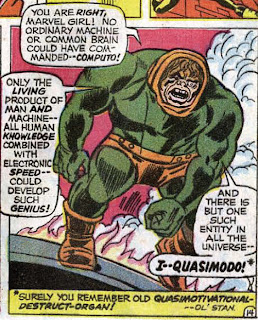 This is the last "disbanded X-Men" story as the team will get back together next issue. The rotating cover feature ends with this issue as well.

The "next issue" box contains a blurb promising a battle between Beast, Iceman and Metoxo the Lava Man. Sometime between this issue and the next, gears were apparently shifted, as that story does not appear in the next issue (nor any other). Years later, a short story in the 1994 Marvel Holiday Special uses this lost tale as its inspiration.

A Work in Progress
Between last issue and this one, the FBI has assigned Cyclops and Marvel Girl to New York, Iceman and Beast to California and Angel as a "roving agent". Cyclops and Marvel have both gotten jobs in order to explain staying in New York. 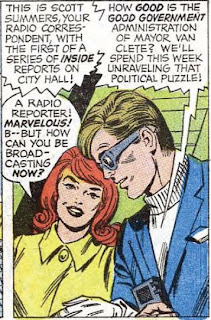 The relative stodginess of the book's early years is washed away somewhat as a bit of sex appeal is injected: Jean spends most of the first four pages in one swimsuit or another. 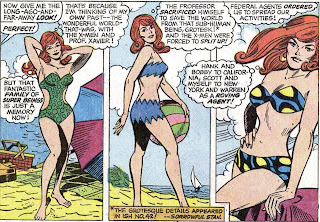 Beasts skill and interest in science is recounted (he has 37 patents in his name), and his large vocabulary is attributed to his love of arts and literature. 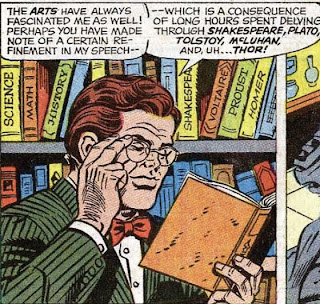 Ah, the Silver Age
Jean's modeling goes about how you'd expect it go considering this is 1968. 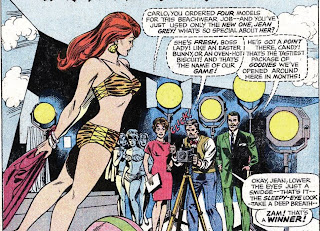 Later, after secretively using her power to prevent an accident, Jean's boss proves to be a sexual harassment suit waiting to happen. 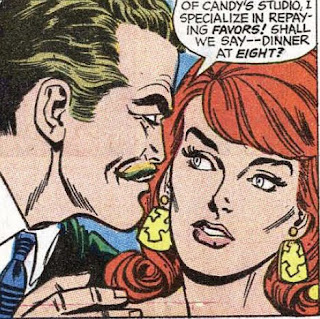 At the radio station, Jean is excited to get the new Chocolate Covered Ashcan recording. 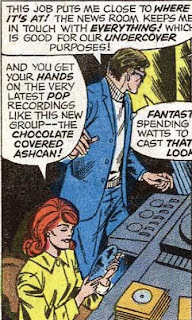 The radio station's new transmitter "uses vacuum tubes as big as a man!" 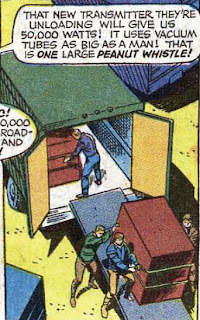 Beast can type with his feet...when they don't get caught in the ribbon. 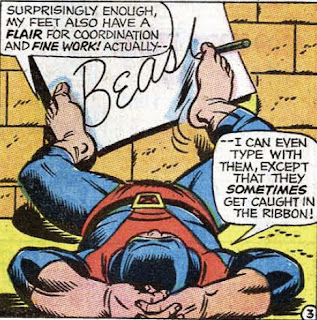 Young Love
Scott and Jean are acting like a couple, confident in their feelings for one another, for seemingly the first time. They're even teasingly making each other jealous. 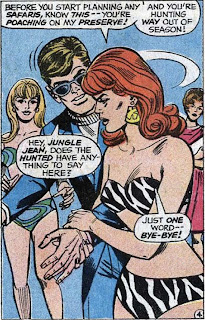 The Awesome and Terrible Power of Cyclops
Cyclops closing line is, "Evil is as recurrent as the cataclysmic upheavals of nature that convulse our planet from time-to-time!" That's some terrible dialogue. 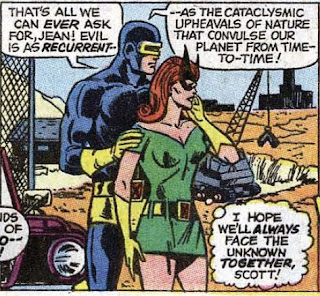 It's in the Mail
Future comics pro Tony Isabella, creator of Black Goliath for Marvel and Black Lightening for DC, has a letter published in this issue. 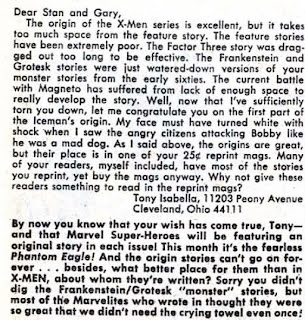 Teebore's Take
More dreck. The setup of the new status quo (revealing where each member of the team is stationed, Scott and Jean's new job) would be more interesting if it wasn't all going to get swept aside in the next issue, having gone nowhere (as it stands, more was done with the new setup between issues then in any of the actual stories). The main story in this issue is little better than the last one. Cyclops and Marvel Girl fight some random, motivation-less robots (they're sent to steal the radio stations new transmitter for...some reason...) before Z-list FF villain Quasimodo pops out on the last page and reveals he was behind "it" all. Purely by-the-numbers stuff and lacking any Silver Age charm or verve to make up for it.
Newer Post Older Post Home
Posted by Austin Gorton at 8:00 AM