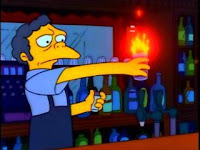 Aerosmith guest stars, the first band to appear on the show. They also recorded a shortened version of their song "Young Lust" from the album Pump to play over the end credits of the episode.

Amongst this episode's many references and parodies, the film Cocktail and the TV show Cheers stand out.

Favorite Lines
Homer: I decided to mix the little bits that were left in every liquor bottle. In my haste, I had grabbed a bottle of the kid's cough syrup. It passed the first test: I didn't go blind.

Moe: Wow, Homer, it's like there's a party in my mouth and everybody's invited!

Ms. Krabappel: Bart, are those liquor bottles?
Bart: I brought enough for everybody.
Ms.Krabappel: Take those to the teachers' lounge! You can have what's left at the end of the day. 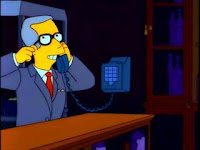 Bart: Uh, yes, I'm looking for a friend of mine. Last name Jass. First name Hugh.
Moe: Uh, hold on, I'll check. Hugh Jass! Somebody check the men's room for a Hugh Jass!
Hugh: Uh, I'm Hugh Jass.
Moe: Telephone.
Hugh: Hello, this is Hugh Jass.
Bart: Uh, hi.
Hugh: Who's this?
Bart: Bart Simpson.
Hugh: Well, what can I do for you, Bart?
Bart: Uh, look, I'll level with you, mister. This is a crank call that sort of backfired, and I'd like to bail out right now.
Hugh: All right. Better luck next time. What a nice young man.

Marge: Well, Homer, maybe you can get some consolation in the fact that something you created is making so many people happy.
Homer: Oh, look at me! I'm making people happy! I'm the Magical Man from Happy-Land, in a gumdrop house on Lollipop Lane! 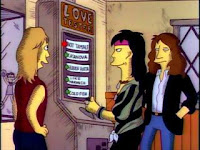 Teebore's Take
Easily one of my all time favorite episodes. Flaming Moe's is packed full of classic Simpsons bits, from Lisa's slumber party at the beginning to Homer's hilarious refusal to say Bart's name after Bart is jinxed, to arguably the best Bart prank call ever to Homer's sarcastic reply to Marge's assertion that he take pleasure in making other people happy. It features one of the best Simpson original songs in the Flaming Moe's parody of the Cheers opener ("where liquor in a mug/can warm you like a hug"). My favorite band even makes a guest appearance.

It's not a perfect episode: as Dr. Bitz has pointed out, it suffers thanks to one of the hoariest of sitcom cliches, the character who inadvertently sabotages his chance at ridiculous wealth (because, after all, status quo must be restored by episode's end). Despite the flaw, Flaming Moe's still engages me to the point that, regardless of how many times I've seen it, I want to yell at Homer, as he dangles from the rafters of Moe's, ready to reveal the secret of the drink and spoil his chance at wealth, "no, don't do it you fool!", even though I know I can't change the outcome.

It may not be a perfect episode, but it's darn close.

Featuring Moe's first starring turn and one of The Simpson's best original songs, Flaming Moe's is a highlight of the third season and an all around classic. 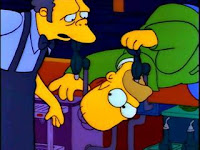