Continuing a look at my ten favorite comic book stories. Be sure to check out the completed list as voted on by Comics Should Be Good readers. 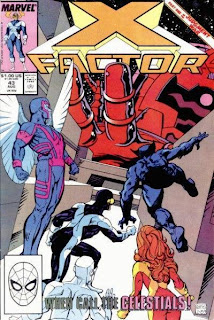 X-Factor (comprised of the five original X-Men) is brought to an alien planet in which everyone has a super power and a civil war is raging between the human-looking Chosen and the monstrous-looking Rejects. Scattered and in some cases amnesiac, the team must come together and help the denizens of the planet stop Armageddon at the hands of the Celestials. 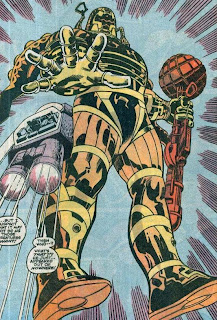 "X-Men in space" stories can be tricky; a lot of people don't like them. I do, but I'll freely admit they stray a bit far from the central themes of the X-Men's world (or do they?). This overlooked and forgotten gem is one of my favorite such stories (it cries out for a trade collection!) and a highlight of the original X-Men's run in "X-Factor". Splitting up the team (and giving various members amnesia in the process) is a standard device to introduce the alien world and it's various factions, but the length of the story (eight issues) allows for plenty of time to develop this alien culture, which helps make the main characters interaction with it seem less frivolous. The story builds to a spectacular finish in which the main characters help the alien world prevent judgment from the near-omnipotent Celestials that could doom their world in an allegory I've always enjoyed. 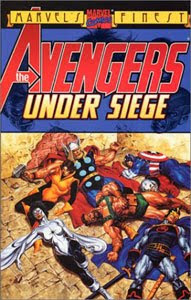 Baron Heinrich Zemo assembles an army of super-villains in the latest incarnation of the Masters of Evil and leads them in a systematic assault on the Avengers that ultimately ends with the Avengers defeated, crippled or captured and Zemo in control of Avengers Mansion. Only the Wasp escapes, and proceeds to assemble a rag tag team to retake the mansion and rescue their friends. 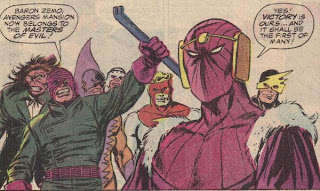 Roger Stern's run on "Avengers" is one of my all time favorites, and in a run loaded with great stories, "Under Siege" is the best. It succeeds because it asks not one but two questions that leave you wondering "how the hell with they pull that off?" First, we wonder how exactly Zemo will defeat the Avengers and then, with Zemo triumphant, we wonder how Wasp will overcome a Masters of Evil team that defeated some of the most powerful Avengers. Watching both those scenarios unfold, the Avengers darkest hour and thus their greatest comeback, is what makes this story great. Also, one of Sterns lasting contributions to the Avengers' mythos was elevating Wasp from the simplistic and flighty socialite of the 60s to an interesting and well rounded character, and this story is the zenith of that development as Wasp overcomes insurmountable odds to retake the mansion and defeat Zemo. 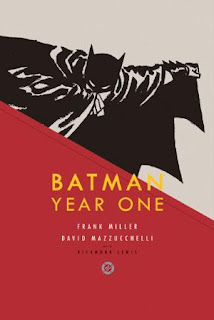 This noir-ish story retells Batman's origin as Bruce Wayne returns to Gotham after studying abroad, determined to wage a war on crime. It chronicles his development of Batman as a means to strike fear into the hearts of criminals and his attempts to shut down the Falcone crime family's influence in Gotham. At the same time, it follows a young Lt. James Gordon, newly transferred to Gotham, as he attempts to deal with the rampant corruption in the police force and the emerging presence of a strangely-dressed vigilante. 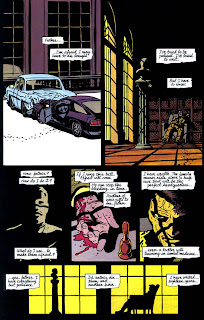 Two stories loom large over every other Batman story written in the last twenty-five years (including, as I'm sure you can tell from the synopsis, the film "Batman Begins"): this one, chronicling Batman's beginnings, and "Dark Knight Returns", chronicling a possible ending. Both are by Frank Miller (of "Sin City" and "300" fame) and both are spectacular works, but I much prefer the more elegant and simple "Year One" over the bombastic and spectacular "Dark Knight". Where "Dark Knight", with it's somewhat-pointed satire of Reagan era America, can sometimes feel dated, "Year One" feels timeless. Perhaps this story's greatest achievement is the development of Jim Gordon as a character, Before this story, Gordon was the guy who flipped on the bat signal and delivered exposition; after this story, he was a character in his own right, as compelling and well-rounded as Batman himself, an integral and unofficial partner of Batman long before Robin appears. Bottom line: if I'm in the mood for a Batman story, this is the one for which I reach most often. 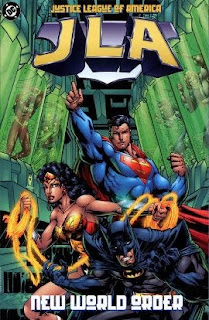 The Hyperclan, a group of aliens with fantastic powers arrive on Earth, pledging to use their powers to make Earth a better place. In reality, they are determined to conqueror the planet and manage to subdue the entire Justice League, save for Batman. Discovering their secret weakness, Batman helps free his teammates and the League defeats the Hyperclan and reveals their deception to the world. 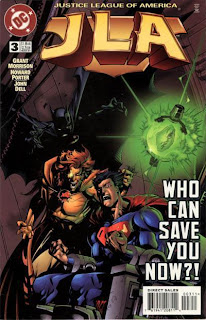 If someone were to ask "what's so great the Justice League?" this is the story they should read. It's packed with cool moment after cool moment, from Flash's race against Zum, to Hyperclan dismissing Batman as "just human" shortly before he takes them apart, to Superman's realization that he only THINKS he's depowered. Grant Morrison's JLA run was filled great moments like that, but this is where it all begins and represents his "Big Seven" league in its purest form (it's the book that got me reading DC, aside from random Batman and Superman issues, regularly for the first time). This is also the beginning of the confident, uber-prepared "Bat God" approach to Batman that I thoroughly enjoy.

Ancient sorcerer Kulan Gath casts a spell which remakes Manhattan and all its denizens into a barbarian world, but it doesn't alter relationships: the X-Men are still outcasts, the Avengers a band of warriors. Only Spider-Man and the Hellfire Club's Black Queen, Selene, remember the real world. After Storm and Callisto accidentally cross the barrier around Manhattan and return to the real world, they strike a deal with Selene to defeat Kulan Gath. Protected by her magic, they return to Manhattan and help revive the memories of several X-Men and Avengers, leading them in battle against their enthralled friends in an attempt to restore reality. 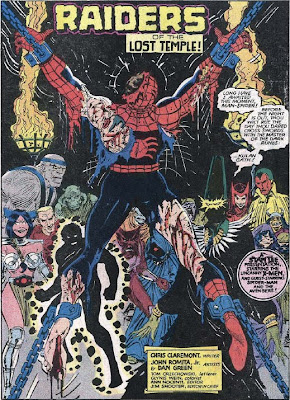 My favorite story drawn by my favorite artist from my favorite run of the series that got me reading comics. This is a tight little two-parter that, while taking place in the pages of "Uncanny X-Men", also features the New Mutants, the Avengers, the Morlocks, Spider-Man and Dr. Strange. So it's basically John Romita Jr. drawing the Mavel Universe. Everyone gets their moment too, making this a great X-Men, Avengers and Spider-Man story (there's an especially cool Spider-Man moment that shows once again that he's a guy who-just-never-gives-up). It features time travel, altered realities (including my favorite altered reality schtick: characters slowly realizing the world they are in is "wrong"), and a battle against impossible odds, three plot devices for which I have a particular inclination. It may only be two parts, but writer Chris Claremont manages to pack a ton of action and character moments into both issues, and Romita Jr. draws the hell out of it all.
Newer Post Older Post Home
Posted by Austin Gorton at 1:05 PM