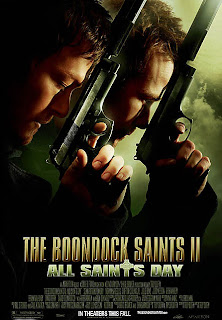 I suppose I should stop there and say that if you haven't seen the original Boondock Saints movie then you probably should before even thinking about seeing this movie. But then again, how often do people even see sequels before the original? Is this a caveat that even needs to be said?

Anyway, when my wife and I planned to see this movie she wanted to watch the first movie again. I was thinking that we've already seen it, like, 15 times, so why would I need to watch it again? But watching the first one again actually proved useful. I had reached my limit of viewings of the movie and started noticing the flaws in the first movie more than ever. I'm not saying that I still don't love the first Boondock Saints, but acknowledging its flaws helped me prepare for the same flsws in the second movie. 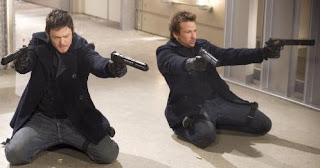 My big complaint is with the action in the movie. The movie includes some great stunts, but overall the action itself is lacking. Generally the action scenes are just shots of people either shooting their gun or getting shot. There's rarely any ducking or strategy to the battles and either the gunfights end too quickly to appreciate them or you never get a feel for the setting of the battle and where people are positioned. In the end, the action feels like people randomly shooting their weapons.

This movie also moves too fast in the beginning. It's obvious Director Troy Duffy know where this movie is headed and what the audience wants. The movie races to get The Saints from where they start to where the audience wants them to be. I generally approve of movies not lollygagging to get to the main plot, but this was at lightning speed. There was no time to take a breath and it leaves us unable to appreciate the somewhat clichéd scene where the Saints get back into their vigilante garb. Couple that with how quickly the Saints meet and accept their new sidekick and you start wondering if Troy Duffy's taxi's meter was running during the filming of the opening scenes.

The humor in this movie is as funny as the first, but it can be a little over the top. Some people may not like this, but I didn't mind it. If you found the humor in the first movie funny, then you'll find this movie funny. But that's the case with all components this movie.

This movie has the same feel as the first movie and also adds some back story to satisfy the more hardcore fans. If you enjoyed the action, plot, and humor of the first movie then you'll enjoy this sequel. It's really that simple. I suppose I could have saved us some time and said that to begin with.

Recap:
The Good: An interesting plot in a similar style to the first movie. There's good action stunts and some funny moments. An overall enjoyable experience.

The Bad: No (female) nudity. The action itself can be a bit stale. Some of the humor may be too goofy for some of the audience. The start of the movie is a little too fast paced.

The Disappointing: The biggest disappointment is the lack of Willem Dafoe. There is, however, a female FBI agent whose character seems exactly like Willem Dafoe's, which just makes you miss him more. But also, if it's called The Boondock Saints, where's Huey Freeman? 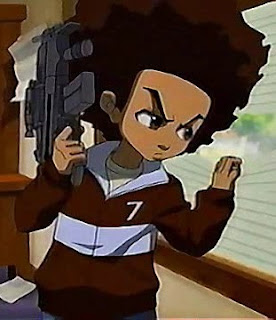 Best Drink To Accompany This Movie: 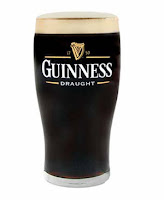 A Pint Of Guinness

I guess I kind of have to go with Guinness, right? Beer and Ireland: the two things The Saints love the most!
Newer Post Older Post Home
Posted by Dr. Bitz at 1:23 PM