The Midwest Comic Book Association has just announced its convention schedule for 2010!

For the first time ever, the two day con will take place in the spring instead of the fall. Microcon, newly re-christened as "Springcon", will be held on Saturday and Sunday May 15th and 16th in Fallcon's usual digs, the State Fair Grandstand.

Fallcon gets demoted to "one day wonder" status, and will be held in Microcon's old home, the Progress Center on the state fairgrounds, on Sunday October 16th.

The move was triggered by a re-alignment of the national conventions. From the official MCBA dispatch:


A lot of the national comic book conventions have changed their event dates for 2010. It started when one of the largest conventions in the country suddenly moved their date to the late fall and quickly, in response, a good chunk of the other conventions followed suit in changing dates. As a result, the MCBA was put into the position of having to move our dates so we wouldn't have to compete for guest creators. Easier said than done!

Fortunately for all of us, our preferred venue, the Minnesota State Fairgrounds, came through with flying colors! They were able to make space for us in the new world comic book convention date order with a slight and very interesting twist!


No word yet on whether attendees will be sporting goatees. 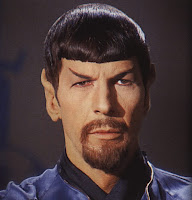