Comics Should Be Good is currently counting the 100 favorite stories as voted on by its readers. Below are my votes, comprising my current ten favorite story lines.

A few words on eligibility: to distinguish this from the previous 100 favorite runs poll, a storyline was defined as being no less than two and no more than twelve issues long, unless the story was longer than twelve issues but clearly titled as a distinct story, either in the issues themselves or later trade collections (such as X-Men's "Fall of the Mutants" or Daredevil's "Elektra Saga). This was put in place to prevent people from voting for all of Preacher, Sandman, Claremont's X-Men, etc. as those are clearly closer to runs than stories.

Personally, I took into consideration stories that I've read numerous times (they need re-read value to be considered a favorite) and is at least a few years old (I need to see if a story ages well before I can consider it a favorite; something I love now may not be as enjoyable a few years from now). As a result, my list skews late 80s/early 90s, as that was the time I started reading comics and thus, includes the stories I've read more often than others. My list also skews heavily in favor of the X-Men and Avengers, the two titles I started out reading and thus, to which I have the longest attachment.

There certainly are BETTER stories out there, stories considered better by the critics and by me. But this is a list of favorite stories, and for me, "favorite" doesn't have to equate to "artistically the best". "Watchmen", for example, is, artistically speaking, a "better" story than anything on this list. I'm sure there are a ton of indie books out there that are better than these stories, but I like super hero comics, and while I can appreciate the quality and artistic merit of something like "Maus", say, it isn't the kind of thing I'm likely to pull off the shelf and dive into for a few hours of pure fun. At least not often. For that, I turn to these stories. 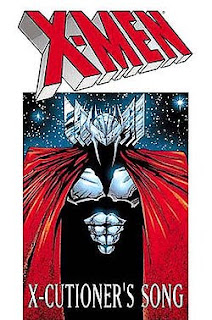 Cable's evil clone Stryfe frames Cable for an assassination attempt on Professor X while exacting his revenge on Cyclops and Jean Grey, leading the various teams to come together in order to save Xavier and rescue their teammates. 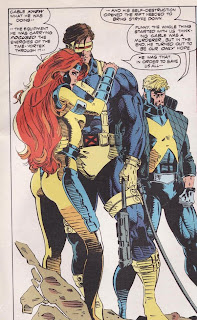 There are certainly better bloated X-Men crossovers out there, but this one was my first and remains a favorite. It was the first time all the X-titles of the time (X-Men, Uncanny X-Men, X-Factor and X-Force) crossed over since I had started reading the titles in the early 90s. It featured Apocalypse and Mr. Sinister, two villains with which I had grown familiar thanks to back issues from earlier in the decade that I had been reading alongside the new stuff, as well as Cable, a character with a mysterious and convoluted past who now represents the complexity of this era of X-Men comics, a character I was already growing to love. Forget the fact that the story never bothered to confirm whether Cable was the true son of Cyclops or the clone;  that it merely implied one of the two men WAS the time lost son of my favorite character was enough to make teen Teebore happy. From the showdown between the combined X-Men and X-Factor teams and the renegade X-Force, to the X-Men forced to team up with Apocalypse in order to save Professor X, to the beginning of the long running Legacy Virus storyline, to three moving epilogue issues including the famous Peter David penned "X-aminations" issue of X-Factor, this story had everything for which a fan of the X-Men in the 90s could ask. 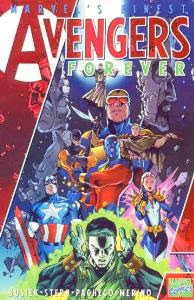 A team of Avengers from various eras (including insane jerk-ass Yellowjacket and Avenger-from-the-future Captain Marvel) are brought together to protect Rick Jones (wielder of the Destiny Force) and the fabric of time from Immortus and the Time Keepers. A tour of Avengers history ensues, Kang (the past self of Immortus) gets involved and by the end, a veritable army of alternate reality Avengers is assembled to face off against their evil counterparts. 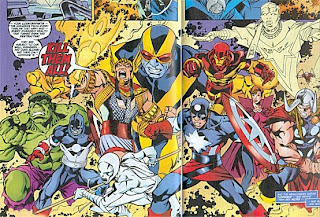 Written by Kurt Busiek with gorgeous art by Carlos Pacheco, "Avengers Forever" is one of my favorite kinds of stories: a time travel story with incarnations of certain characters from different points in that character's personal timeline interacting with each other, a story which takes the reader through the history of the title, touching up and clarifying various points of continuity along the way. And it's all capped off with an awesome slugfest that really shows what the Avengers are all about: the best of the best coming together against insurmountable odds. That every issue ended with annotations turned some people off; for me, that makes me love the story more.

The West Coast Avengers get displaced in time by Dominus, and discover they can only move backwards in time. After, amongst others, a stop in the Wild West (during which they hang out with Marvel's Western characters) they ultimately decide to go back to ancient Egypt and try to hitch a ride back to the future with the Fantastic Four, who ended up in that time early in their adventures together. Along the way, Hawkeye and company leave clues as to their whereabouts for characters in the present and interact, behind the scenes, with events from old issues of "Avengers", "Fantastic Four" and "Doctor Strange". 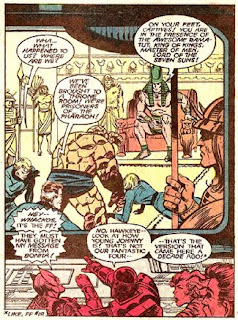 See my comments for "Avengers Forever". I love a good time traveling yarn, and while "Forever" was more about patching Avenger's continuity, this one has a lot more fun with traditional time travel plot devices, like Hawkeye in the 1800s leaving Hank Pym a note in place he knows Hank will find it in the present, or the time travelers intentionally going even further back in time to a place where they know other time travelers will be. The story also had lasting reprecussions on the book, including the fallout from Hawkeye's wife Mockingbird allowing the Phantom Rider to die (she had good reason. And frankly, Hawkeye was kind of a dick about the whole thing) and Hank Pym coming into his own following the whole "slapping his wife, kicked off the Avengers, sent to jail thing". Frankly, this story would be higher on my list if not for the workmanlike (and that's being charitable) art by Al Milgrom, Marvel's go-to guy in the 80s when they wanted to crap up the art in a book, working against the story instead of with it. 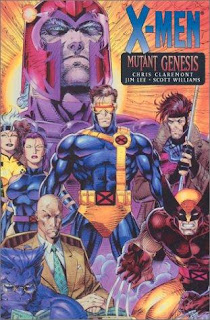 In the last three issues of Chris Claremont's fifteen year run on the X-Men, he launches a new "X-Men" book to the tune of several million copies sold. A larger, restructured X-Men team (this is the beginning of the "Blue and Gold" era, with the team split into two squads, led by Cyclops and Storm) face off against Magneto, reluctantly dragged back into mutant affairs by a new group of self-proclaimed Acolytes. Claremont goes out with a bang, pitting the two squads of X-Men against each other before destroying Asteroid M and seemingly killing Magneto, all beautifully drawn by Jim Lee. 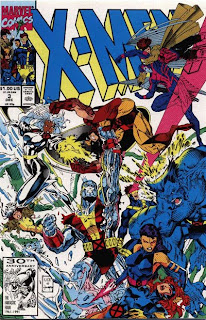 I have read these three issues probably more than any other on this list. Lee's art captivated me when I was younger (as it did many at the time). I know he has his detractors nowadays, but I still dig the man's art. This story ably touches upon various moments from the X-Men's past with Magneto, including Magneto's sinking of a Russian sub (in Uncanny X-Men #150), his leadership of the X-Men circa issue #200, his relationship with Rogue (in Uncanny #274-275), the recently completed X-Tinction Agenda crossover, even Magneto's reversion to childhood in Defenders #11. It's done in such a way that my complete lack of context for any of those reference when I first read it didn't detract from my enjoyment of the story, but led me to more and more back issues, so that each time I re-read it, I had gained new knowledge that helped the story feel more full. While Claremont's writing can come across as stilted and overly-purple these days, when I was fifteen, his words closing issue three, eulogizing Magneto and, effectively, his career as the X-Men's chief architect, was the best damn writing I'd ever experienced. 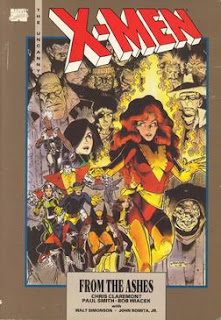 Kitty Pryde calls Professor X a jerk, the Morlocks debut, Rogue joins the X-Men, Wolverine almost gets married, Storm gets a mohawk, Dark Phoenix returns (or does she?) and Cyclops takes on the entire team, and wins. So he marries a woman identical to his deceased childhood sweetheart and fights a giant squid on his honeymoon.

Although it's technically a lot of shorter stories, this chunk of issues was collected in the "From the Ashes" trade (which made it eligible per the official rules) and is ostensibly the story of Mastermind's attempts to eff with the X-Men and make them believe Dark Phoenix has returned. It encompasses the back end of Paul Smith's phenomenal run as X-Men artist, contains many of my all time favorite X-Men moments, and is capped off by (perhaps) my single favorite issue of "Uncanny X-Men".