Over at the ISB Chris Sims put out a request to find the most 90s cover ever. Here's my suggestion: 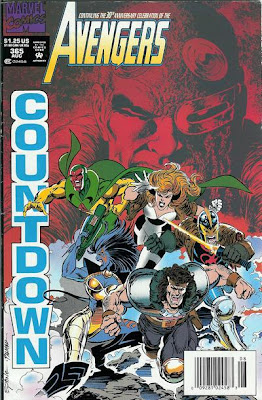 The following 90s cliches can be observed on this cover:
Also, I'd like to point out this is an Avengers cover. I mean sure, when a WildC.A.Ts or Spawn cover is filled with 90s cliches, it's kind of expected. But this is the Avengers, arguably one of Marvel's oldest and most traditional super hero teams, decked out in full 90s regalia (to see what the 90s did to the Fantastic Four, inarguably one of Marvel's oldest and most traditional books, go here).
Newer Post Older Post Home
Posted by Austin Gorton at 10:25 PM