To Better Know a Hero: Batman

The highly anticipated movie The Dark Knight is coming out on Friday but Teebore's on vacation! I suppose that leaves the "To Better Know a Hero" entry on Batman up to me. Now, I'm not as knowledgeable about comic books as Teebore is, but I can use Wikipedia along with my vague memories of the Batman movies, the animated series, and the Adam West TV Series to cobble together a post. How bad could it turn out to be?

First Appearance: I assume Batman #1...wait! Let me check Wikipedia...apparently it's Detective Comics #27 May, 1939 (Yeah, because the first thing I think of when you say detective is a dude dressed in a giant bat costume.)

Powers and Abilities: He's just a dude...but has a lot of money. Think Richie Rich but with ninja training. He has extraordinary intelligence and a utility belt filled with various bat-paraphernalia. Other than that, he's a great detective, a ventriloquist, an escape artist, a dick, and he can do the batusi. To put it another way, despite not having any actual super-human abilities, there's nothing Batman can't do. 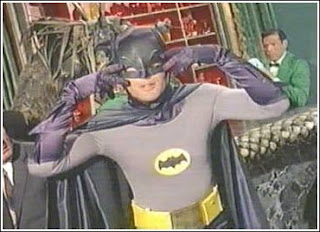 Weaknesses and Achilles’ Heels: He's just a human, so I assume a bullet to the brain would be a weakness. Also he has a penchant for supple young boys in tights. I don't know what else to say...mentioning his dead parents probably makes him cry. Wuss. 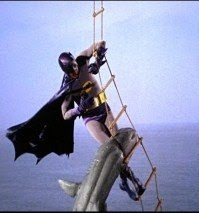 Gadgets and Accessories: Didn't I just mention his utility belt? For God's sake the man can pull out a can of bat-shark repellent if need be. His utility belt can produce whatever he needs at any time, unless the plot dictates that Batman can't have a certain item. Then that item will be temporarily absent from his belt.
Also, Batman has a super computer, all sorts of aerial vehicles, a red phone that's directly connected to the commissioner's office (though nobody thinks to trace the phone wire to find out Batman's true identity), thermal tights that Robin forgot to wear once when facing Mr. Freeze, and, of course, a phallic shaped car.

Friends and Allies: Dick Grayson (Old Robin, New Nightwing), Tim Drake (New Robin), Jason Todd (Dead Robin), Stephanie Brown (Dead Female Robin/Spoiler), Teebore, Alfred E. Neuman (Butler), Commissioner Gordon, Catwoman (Only in bed), Batgirl (when she's not falling off a roof), Batwoman (mmmm...lesbians), Batman Beyond, Superman and Wonderwoman (to form the "We're Better Than the Rest of You" Trio), Harvey Dent (half of the time, anyway), and that one maid from the TV show. That's probably everyone.

One-Sentence Origin: If I remember correctly...the Joker kills Batman's parents driving Batman to put on tight tights that emphasize his bulge and prompting him to learn the batusi so that he can dance with the devil in the pale moon light.

Memorable Moment: When Batman needed to get rid of a bomb he attempted to throw it out a window but there were people around. So Batman tries to clear out a restaurant but two fat chicks refused to leave. So Batman runs around a dock looking for a place to throw the bomb but he keeps encountering people he'd rather not blow up. Finally, Batman decides to dump the bomb into a river but there was a family of ducks swimming there. Batman then exclaimes, "Some days, you just can't get rid of a bomb." 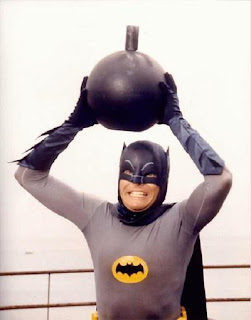 Fun Fact: This guy is, in fact, NOT the Riddler:

Dr. Bitz’s Take: Batman is the sacred cow of the comic book community. To say Batman is anything less than spectacular and the greatest superhero ever is blasphemy. So I have to be careful as to what I say or a horde of geeks will beat me with their life-sized batarang replicas.
Everyone loves Batman because he's dark and brooding...which pretty much makes him like 90% of all comic book superheroes. Although, he was the first, so I have to give him that.
Ironically enough, though, part of the reason Batman is such a mainstream name is because of the campy 1960's series, which was anything but dark and brooding. But comic book geeks hate the 1960's Batman because they have no sense of humor. However, I think we can all agree that Batman and Robin just plain sucked.

Seriously though, I think what sets Batman apart from other heroes is his giant heart. I mean, when Alfred led Vicki Vale into the batcave revealing Batman's true identity Batman wasn't mad. He was actually indifferent. Batman was comfortable with what Alfred had done because Batman knew that what was really important was not fighting crime but love. And Batman's love for Vicki Vale knows no bounds.
So, in the end, when I think of Batman I think of one simple statement: Love conquers all. 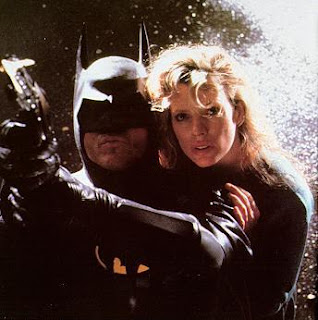 Email ThisBlogThis!Share to TwitterShare to FacebookShare to Pinterest
Labels: Batman, comics, To Better Know A Hero