Well, I’m back from an impromptu and undeclared little posting vacation, brought about by the winning combination of apathy and laziness. I was thinking of doing one of those “New Year’s Resolutions” posts, but since my resolutions are always the same (lose weight, spend less, write more-speaks to my success at keeping them that I repeat them year after year, doesn’t it), instead I thought I’d follow up Dr. Bitz’s insightful and thought provoking post about politics with one about toys.

I received as an indirect Christmas gift (via a gift card, and on clearance!) a box set of the five main Joe figures from the recent line of 25th anniversary figures: Duke, Scarlett, Snake-Eyes, Roadblock and Gung-Ho, all packaged in a nifty looking box with a plastic…rectangle…embossed with the GI Joe logo that sings the TV show’s theme song.
I’ve been meaning to mention this for awhile, but these new Joe figures are eight kinds of awesome. The new figure sculpts and paint designs are different than the original figures yet still obviously inspired by them. They have more articulation than ever before (including wrist joints!). Their belts/vests/bandoliers aren’t just painted on-they are separate pieces and they don’t interfere with a figure’s possibility. Their weapons actually fit into the holsters, yet the holsters aren’t enormous and ungainly. Speaking of their weapons and accessories, Hasbro made new molds for them, instead of just remaking weapons from the original line (which is what they did for the previous reinvention of the line, in the late 90s/early 00s; don’t get me started on how much those figures sucked, especially compared to these). At 5.99 a figure, they only cost three times more than they did when I collected the originals; not too bad for 20 years of inflation. The artwork on their cards (and the file dossiers on the back) appear exactly as they did on the original figures, further adding to the nostalgia. And each figure comes with a labeled display base.

Originally planned as the two five figure box sets (one Joe, one Cobra) plus a couple waves of carded figures to be released in 2007, Hasbro has announced they are continuing the line into 2008. Which figures would I like to see included? Some of my favorites are already on the shelf or have been announced: Zartan, Serpentor, Shipwreck, and a Crimson Guard trooper. I’d still love to see carded versions of Destro and the Baroness (I haven’t been able to find the Cobra boxed set on clearance anywhere), the weird Cobra twins, Xamot and Tomax (two figures from the original line I always wanted and never got), Dr. Mindbender (with a cloth cape, like the original!), Wet Suit (I always loved the “underwater” figures), Lt. Falcon (voiced by Don Johnson in the movie. Don Johnson!), Mutt and Junkyard (the first GI Joe I ever had), and a true pipe dream, a Nemesis Enforcer with huge, possible wings.

But that’ll never happen, because it would remind people of that awful Cobra-La stuff from the movie. And ignorance is half the battle. 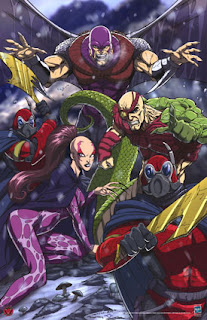