Green Bay Packs In The Stupidity

Well, to get us geared up for the NFC Championship Game I decided I'd rant a little bit about the Green Bay Packers.
When I was first becoming a football fan, which wasn't as long ago as you'd think, I remember having a healthy respect for Packer fans. I felt their passion and fervor was bar none.
I was talking to a coworker of mine at the time and the topic of football came up. We discussed the Vikings and how bad they were. I Then brought up Green Bay fans and erroneously talked about how they always cheer for their team, even in bad times. (I've later found out this is just a myth propagated by Packer fans.) I called Packer fans 'hardcore.' My coworker called them stupid. He then bestowed upon me wisdom for the ages.
"If you're team sucks, you boo them. How else are they going to know?"
Those two sentences transformed how I feel about sports.
Why shouldn't I boo my team? If you're my team, I want you to do well. If you're not doing well then should I not voice displeasure? Isn't losing unacceptable? Why should I cheer you if you're sucking? If people cheer their team regardless of performance, then what motivation does the team have to perform well? Well, OK, maybe athletes don't do everything just for fan appreciation, but you get my point.
From then on I treated the Packer fans' obsession with their team and quarterback with disdain. The fans wore blinders and could never see their team for what it was.
Some say I'm too far to the other side regarding the Minnesota teams, but I ask you, what Minnesota team gives me reason not to be negative?
Anyway, as I got older I also realized that not only were Packer fans delusional, but they have no sense of priorities. (And the constant media hype of Brett Favre isn't helping matters.) So, needless to say, the endless Packer talk I've heard this week has nearly made me puke. And then I heard about this article.

ARE YOU FREAKING KIDDING ME? This is the stupidest thing I ever heard. First lets look at the stupidity on hand. Eli Manning enjoys Seinfeld, so the program director of the Fox affiliate in Green Bay takes their normally scheduled syndicated episode of Seinfeld off the air. Umm...why? Because it might make Eli Manning (or..."the enemy"...as he calls him) laugh?
Come on. Why would the program director even assume Eli knew Seinfeld was on the air in Green Bay anyway? Heck, if I went to Green Bay I'd be surprised to hear they had televisions that showed something non-Packer related.
Anyway, last I checked, Eli made decent money. And you know what big time athletes do for road games? They bring portable DVD players. And if Eli likes Seinfeld that much, I doubt a couple of seasons of the show isn't out of his price range.
OK, so the very idea of not airing Eli's favorite show is stupid. But let's look at the bigger picture.
What the hell is wrong with Green Bay?
The answer is simple, they're a small town with a nationally recognized commodity. Since all Green Bay is known for is the Packers, that's all Green Bay residents focus on. There's only two things to do in Green Bay, watch the Packers and drink. So, during the NFL off season, things get pretty boring. They just wait sit and wait for football season to begin. I would like to get some statistics on how many Green Bay residents actually have an orgasm after the opening kickoff of the first Packer game of the season. But I digress.
What this all boils down to is a small town that has completely lost its perspective. Some people think it's cute that Green Bay would not air an episode of Seinfeld or change New York Avenue to McCarthy Way for a week. I think it's a sign that people's priorities are out of whack.
Packer fans like to talk about how Lambeau Field is always Packer territory, but when the Packers come to the Metrodome Green Bay fans take the place over. I take that as a compliment. The reason for this is obvious. People living Green Bay, and most of Wisconsin for that matter, always feel the need to move to a real state, like Minnesota. Minnesotans, however, are generally happy where they are and if they are to move it certainly wouldn't be to Wisconsin. Thus the high influx of Packer fans to Minnesota and relatively low influx of Vikings fans to Wisconsin.
People say that football is life in Green Bay. Well, in Minneapolis, during the football season I could walk the streets Monday morning and ask the people if the Vikings won yesterday. I would guess about 25% of the people would respond with either 'Vikings suck' or 'The Vikings played yesterday?' Green Bay residents may see this as a lack of passion or proof that Green Bay is a better football town. I call it a dose of perspective. It helps remind me that not everyone cares about football and football definitely is not life.
Perhaps that's what Green Bay needs. Instead of another Superbowl appearance they should get a dose of perspective. But I have a feeling that's not going to happen.
Of course, this whole post could have been written by me simply out of sour grapes. But that would make me a petty hypocrite, wouldn't it? 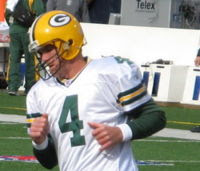 There is yet to be a time table on when God will smite Green Bay for the worship of a false idol, but it can't come too soon. Although Packer fans may argue with the use of the adjective 'false'...but talk like that only makes God grow angry...and GREEN!
Newer Post Older Post Home
Posted by Dr. Bitz at 11:44 PM