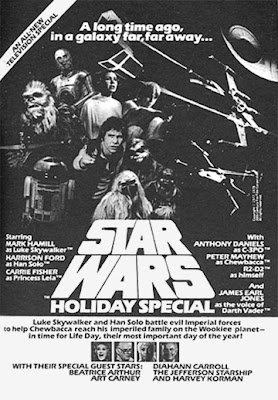 Honorable Mention: Star Wars Holiday Special: All I’ve seen of this red headed step child of the Star Wars franchise is the animated segment (on a bootleg video) and five minutes worth of excerpts from the live action pieces on YouTube. That was enough to tell me how truly, truly wretched the whole thing must be, and enough to make yearn for George Lucas to get over himself and release this on DVD so we can all bask in its glorious awfulness. A reportedly terrible mash up of Star Wars, Christmas, and 1970s musical and comedy variety shows, this special features such moments as Chewbacca rushing home (with Han in tow) to spend “Life Day” with his family, including his son Lumpy, Art Carney helping his family avoid Imperial entanglements, Bea Arthur as a singing bartender in the Mos Eisley cantina and Princess Leia belting out an off key rendition of a classic Life Day/Christmas song to the tune of the Star Wars theme. Now tell me, what part of that makes you NOT want to see this trainwreck?

5. Simpsons Roasting on an Open Fire: The animation is crude but the characters we know and love are all there (in one form or another): mischievous Bart, precocious Lisa, lovable oaf Homer, yellow haired Barney (oh, wait). For years I complained about the lack of new Simpsons Christmas episodes, but now I realize all they really need is this one episode. We’ve got Bart comparing himself to Tiny Tim and Charlie Brown, Homer’s inept Santa training and the cheap gifts he gets the family, including a plastic chew toy for Maggie (“It says it's for dogs, but she can't read”) and a they-lose-but-still-win finale with the adoption of Santa’s Little Helper.

4. How the Grinch Stole Christmas: I debated about this one- I haven’t watched it in several years, after all, so should it really qualify as a favorite? But thinking back, I realized I do have a lot of fond memories of it that the wretched Jim Carrey live action debacle couldn’t taint. Besides, the Grinch is a hell of a character, and this is one of the best tellings of the “Christmas isn’t about stuff” morals.

3. Rudolph the Red Nosed Reindeer: For most people, they love this one for Hermy the Elf. The Island of Misfit toys is a hell of a lot of fun. And Yukon Cornelius is one of the best names ever. But for me, it’s all about the Bumble.

2. Mickey’s Christmas Carol: Casting Scrooge McDuck as, well, Scrooge, this Disney take on Dickens isn’t as funny (or musical) as the feature length Muppet Christmas Carol, but remains a nostalgic favorite from my childhood, with some great atmospheric animation.

1. Charlie Brown Christmas: Basically, I wrote this post just to point out how much I love this show. For me, this presents the best “true meaning of Christmas” message, from Linus’s biblical quotation to the kindred spirit Charlie Brown sees in the woeful Christmas tree he selects. The outstanding music from the Vince Guraldi Trio is easily my favorite Christmas CD of all time. Of all the things I love about the Christmas season, and look forward to, watching this every year is easily near the top of the list.
Newer Post Older Post Home
Posted by Austin Gorton at 8:16 PM