On Thursday, December 13, 2007 George Mitchell released a report of his findings on his two year exhaustive examination of steroids and Human Growth Hormone (HGH) and their involvement in Major League Baseball. Included in the Mitchell Report was 30 to 40 baseball players who, according to testimony and evidence, have used Steroids or HGH during a portion of their baseball career. The most surprising name on this list, by far, is the name of ex-Minnesota Twin outfielder/designated hitter Rondell White.
There are bigger 'stars' on the report, such as Roger Clemens and Miguel Tejada, but Rondell White clearly was the most shocking name. With players like Roger Clemens steroids could explain why they were so dominate. With Rondell White fans and experts alike are confused as to how somebody could play so ineptly and be taking performance enhancing substances. The thought of what Rondell White would be like without steroids is truly mind-boggling.
Kirk J. Radomski, former Met bat boy and well known steroid supplier, notes that Rondell White was the 'black sheep' of his steroid customer base.
"Yeah, I really don't like talking about him [Rondell White]." Radomski admitted. "I mean, I gave the guy steroids thinking it would improve his game and then I saw his 7 home runs and .246 batting average in Minnesota during the 2006 season...let's just say it was bad for business." 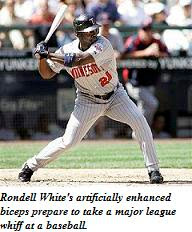 Rondell White allegedly began taking steroids in the year 2000. Oddly enough, in that season he saw a decrease in home runs and batting average. Apparently, the steroids he took were no match for his complete sucktitude at the game of baseball. He reached a career low in futility when entering the friendly confines of the Metrodome and playing for the Minnesota Twins in 2006 and 2007. Throughout the two injury riddled seasons White managed a paltry 11 home runs and a putrid .210 batting average.
Victor Conte, founder and owner of the infamous steroid lab BALCO, emphatically states that White's results are NOT typical.
"Listen, I don't know what kind of crap Radomski was distributing but our stuff can make a home run god!" Conte stated referring to frequent Balco customer and record breaking home run slugger Barry Bonds. "Rondell White is giving steroids a bad name. Steroids makes athletes better! We are efforting to get White's name stricken from the Mitchell Report. It's an embarrassment I tell you, an EMBARRASSMENT!"
Ex-Twins General Manager Terry Ryan was the person who signed Rondell White in 2006 and was as confused as anybody.
"Honestly, steroids wasn't even on our radar." Ryan admits. "We just signed him because he was an aging veteran who came at the right price. The Twins motto is, 'If it ain't fiscally responsible, it ain't the Twins.' So a steroid slugger is usually out of our price range." Ryan then looked off into the middle distance and scratched his head. "Steroids...Rondell White...really!?"
Rondell White could not comment on the situation. The vacuum created by his own sucktitude made audible communication impossible. However, ex-teammate Michael Cuddyer could comment and probably said it best.
"Ro-White was taking steroids?" Cuddyer questioned. "Well, I guess you can put chocolate sprinkles on a dog turd but it will still taste like [Expletive Deleted]*."

*Author's Note: I considered using [Expletive Deleted] to replace all occurrences of the words "Rondell White" but that made the article too confusing.
Newer Post Older Post Home
Posted by Dr. Bitz at 10:32 PM