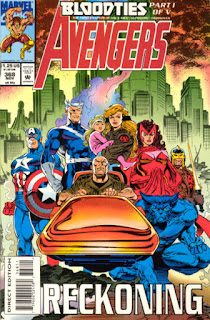 In a Nutshell
"Bloodties" begins as Cortez kidnaps Magneto's granddaughter and kicks off a civil war in Genosha.

Plot
Fabian Cortez & the kidnapped Luna Maximoff look out over the burning capital city of Genosha. Meanwhile, Val Cooper, Nick Fury & Henry Peter Gyrich discuss the Genoshan situation and their plans for handling it, which leads to Nick Fury meeting with both teams of Avengers to explicitly inform them that the UN wants them to stay out of the situation. The Avengers are puzzled by the fervor of Fury's demand, until they realize that Luna, Crystal's daughter - Magneto's granddaughter - is likely to be a target. Crystal rushes to her daughter's room only to discover she has been replaced by a Genoshan mutate, who promptly blows herself up. Meanwhile, Gyrich tasks Professor X with attempting to broker peace in Genosha, and they depart for the country along with Beast and US Agent, with Xavier telepathically sending the X-Men on ahead of him as well. Back at the Avengers' complex, the group rushes to their hanger to depart for Genosha, only to find a contingent of heavily armed SHIELD forces ready to prevent them from leaving, while in Genosha, Cortez broadcasts a message declaring, in the name of Magneto, that all human forces in the country lay down their arms, or else the mutates will begin killing every human man, woman and child in the city.

Firsts and Other Notables
This issue kicks off "Bloodties", a crossover between the X-books and the Avengers books (at least, the franchise's respective two "main" series) in celebration of the franchise's shared 30th anniversaries (both the original Avengers and X-Men titles debuted with issues cover-dated September 1963; both issues were likely on sale circa July of '63). In addition to that shared launch date, the series share a fair amount of history, respective to other Marvel titles (ie, the Avengers & X-Men have a more significant history together than, say, the X-Men and the Fantastic Four), thanks in large part to Quicksilver & Scarlet Witch, who debuted as X-Men villains before joining the Avengers and becoming mainstays there (particularly Scarlet Witch). Once the pair were revealed to be the children of Magneto, the ties between the series tightened, as they had when Beast joined the Avengers (making him the first characters to be an official member of both teams) and again, when former Avenger Ms. Marvel became a quasi-supporting character in X-Men for a time before joining the Starjammers (who are tied to the X-Men as well), and then again when Quicksilver joined X-Factor. And, of course, the ties between the series are currently strengthened by the fact that the X-Men group editor, Bob Harras, is also the writer of Avengers.

It is the Magneto connection that this crossover exploits most fully, with the inciting incident that leads the Avengers to get involved being the kidnapping of Luna, the child of Quicksilver & Crystal (and thus Magneto's grandaughter) being kidnapped in Magneto's name (erroneously, to anyone who knows as the X-Men do that Magneto is currently in no position to order anyone to do anything).

And it is Fabian Cortez, last seen being attacked and then kicked out by Exodus and Magneto's Acolytes in Uncanny X-Men #304, who is responsible for that kidnapping, popping up at the start of the issue, having performed that act and exacerbated tensions in Genosha prior to the start of the issue, and who declares himself the ruler of the country by issue's end. He is nominally the central villain of this crossover (though the X-Men and the Avengers end up fighting Exodus more than Cortez), which serves more or less as the last hurrah for the character in the 90s (he'll next show up in a '96 Magneto limited series), and one of the better details about this story is the fact that Cortez is doing all this to draw Magneto out (as well as for other not-terribly-well-explained reasons), not realizing that he's currently a vegetable and unaware of anything going on around him. 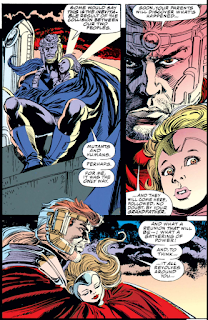 Expatriate Genoshans Phillip Moreau (son of the former Genegineer) and his mutant girlfriend Jenny Ransome (whose flight from Genosha kicked off the initial Genosha storyline) are on hand, joining Professor Xavier's mission to try to broker peace between the two sides. 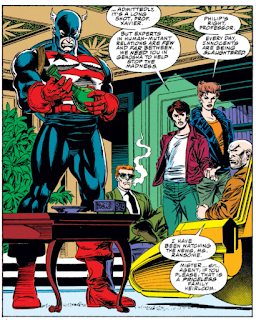 Quicksilver says he is considering visiting his wife before returning to X-Factor; while events in this story will of course wreck those plans (though he will end up spending time with his wife in the process), he also won't return to X-Factor, as he more or less rejoins the Avengers after this story. 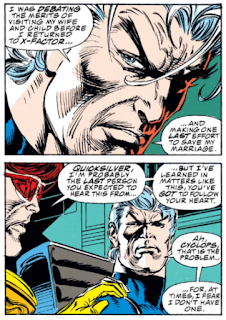 For those unfamiliar with the Avengers of this era, it's worth noting that since roughly the mid-320s of their series, the team has operated as an officially-sanctioned extension of the United Nations (whereas prior to that, they were sanctioned specifically by the US government only, when they were officially sanctioned), something which never really affected their stories much outside of this one, where that status is referenced as a means to keep the team out of Genosha (where the politicians think they're presence will make a bad situation worse). The Avengers' ultimate outright rejection of that charter will factor in to a future chapter of the story.

Luna was seen being abducted from her room on the last page of issue #367, though the exact culprit was unclear (that it was a pair of Acolytes is more obvious, though I have no idea who the second Acolyte is meant to be, as Cortez has been expelled from that group and no other Acolytes appear by his side in "Bloodties"). 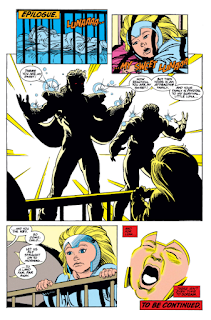 Creator Central
X-Men writers Scott Lobdell & Fabian Nicieza get a special thanks in the credits to this issue, presumably for helping hash out the overall story with Harras. Notably, Roy Thomas (who writes the Avengers West Coast chapter of the crossover) is not thanked, suggesting he didn't have a hand in shaping the story.

The Chronology Corner
This story obviously takes place after "Fatal Attraction" (including Excalibur #71), as well as after X-Men Annual #2.

A Work in Progress
The opening narration refers to Genosha as having once been a "green and pleasant land", which of course was the title of the first Genoshan story in Uncanny X-Men #235-238.

Magneto's EM pulse, deployed in X-Men #25, is cited as contributing to the outbreak of hostilities in Genosha, as is the simmering Legacy Virus plague. 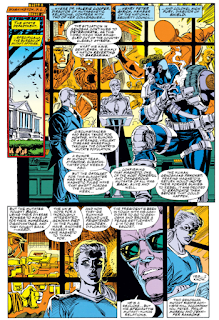 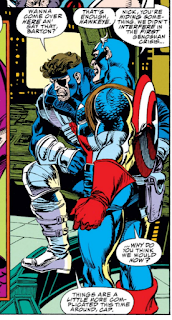 It's not a big deal, but at one point, Xavier asks US Agent to be careful handling a vase, as its a priceless family heirloom. One would suspect that most of Xavier's family heirlooms would have been lost the second time the mansion was destroyed (in Uncanny X-Men #243), if not the first time it blew up (Uncanny X-Men #154). Unless kept a store of heirlooms offsite, or locked up in the subbasement levels.

Beast's history with the Avengers and Henry Peter Gyrich (who was their original liaison during Beast's tenure on the team) is referenced. Beast is also much more jocular & effervescent in his interactions with Gyrich than he's been of late, a nice bit of characterization callback to his time with Gyrich on the Avengers, when his sense of humor was routinely highlighted. 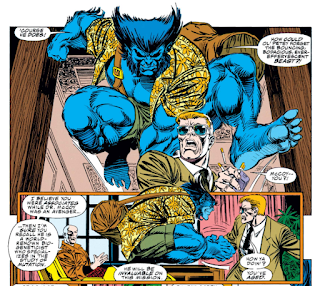 It's noted that Trish Tilby is the reporter who managed to get a video of the Genoshan mutates massacring humans out of the country, triggering the international crisis. 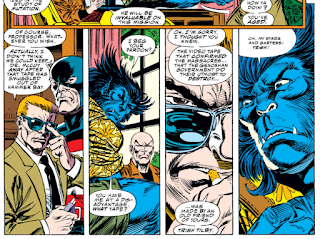 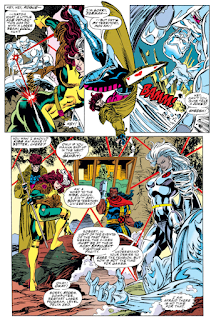 Austin's Analysis
"Bloodties" is not a terribly good story (for reasons we'll get into/become readily apparent as it goes on), but I nevertheless have a lot of affection for it. After getting into comics via the X-Men, the Avengers became the next series/franchise/group of characters into which I got heavily invested (I don't recall exactly why, but perhaps the various ties between the two groups helped), and to this day, I consider my knowledge and familiariaty with the Avengers to be second only to that of my X-Men knowledge. And, getting into comics when I did (the early 90s), the Avengers I had to fall in love with (outside of back issues) were, of course the X-Men-ified leather jacket Avengers of the Harras/Epting run (this issue is part of the tail end of that run, which concludes with issue #375). So "Bloodties" wasn't just an X-Men/Avengers crossover, or the culmination of the two groups' respective 30th annversary celebrations (both of which I'd been following religiously and with bated breath), but the first meeting, in my limited comic-book-reading time, of the two great loves of my comic book life. There was arguably no one better primed to love this story at the time, and love it I did, despite its (less apparent then, more apparent now) flaws.

But flawed as it is, it all starts off well enough with an introductory chapter that kicks off the various plots and moves all the players into position. This issue begins a little jarringly, somewhat in media res, with Genosha having descended into chaos and Cortez kidnapping Luna Maximoff mostly off-panel, but Harras quickly ties those events to recent X-book happenings, citing Magneto's pulse wave and the threat of the Legacy Virus as contributing factors to the violence, helping the situation feel less like it's coming out of left field (considering the last time we saw Genosha, circa X-Factor #91, it was relatively rebuilt and humming along, looming plague aside). And it of course helps, both narratively and commercially, that one of the strongest connection between the two teams - Magneto - was also the central figure of the X-Men's anniversary story and was left in a fairly unique condition by the end, which helps inform this story (his absence from these events, and the reason for it - which certain key characters know while others don't - looms large), so Harras has a strong hook on which to start the story. Genosha is primarily an X-Men setting, but Magneto's granddaughter is the child of one active Avenger and one longtime-if-currently-lapsed Avenger, and that's enough to justify bringing these two teams together for now, while also generating a lot of energy in this initial chapter of the story, even if later chapters fail to fully utilize the potential established here.

Next Issue
Next week, another Wolverine one-shot, Killing, and Cable #5.