In the fashsideways world, Locke is both better and worse off than Island Locke. He seems less angry and more accepting of his condition; note the amusement on his face while getting drenched by the sprinklers, a call back to season one Locke's enjoyment of the island rain but also an indicator of how different this Locke is. Island Locke would have been embarrassed, angry at the seemingly endless humiliations life is foisting on him. Sideways Locke didn't chase away Helen and (judging from the offhand comment about his father) was never conned by Anthony Cooper (and perhaps was injured in a different way as well). While he shares some of the same frustrations as Island Locke, he seems able to prevent those frustrations from defining his life the way they did Island Locke's. Ultimately, by the end of this episode, Sideways Locke finds himself in a better place than his counterpart, perhaps even finding a friend and kindred spirit in Coffee Nazi Ben.

Of course, Sideways Locke is lacking the one thing that so defines Island Locke: faith. He doesn't believe in
miracles, destiny or any kind of higher purpose. While Island Locke suffered greatly at the hands of Cooper and toiled through a life of frustration, it drove him to believe that he was meant for something greater (whether or not he was right remains to be seen). Sideways Locke, more content, happier, lacks that drive, and thus, the faith that a greater destiny awaits him. Would Island Locke trade his faith for the more balanced, content but (to him) less meaningful life of Alt Locke? Maybe, maybe not.

The struggle between free will and destiny has never been closer to the surface of Lost's narrative, represented by the three Locke's in this episode: Dead Locke, whose faith led him to a grave on the beach, Not Locke, who rages against Jacob's conception of free will, and Sideways Locke, who sounds more like Jack in the Hatch than Dead Locke's counterpart. Which Locke has it right? IS there a right answer? The answers, it seems, are indelibly linked to the unfolding endgame. 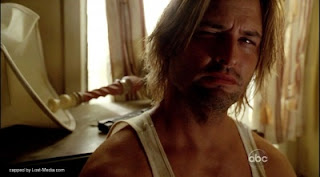 The rules got mentioned again, by the Astral Kid Flocke saw. Presumably, these are the same rules that govern Ben and Widmore's conflict, mentioned in "The Shape of Things to Come".

Ben's still somewhat shell shocked, but he's slowly coming back to himself: he lied to Ilana about Smokey killing Jacob.

As weird as it was to see Richard all unkempt and frantic, it was weirder to see Ben digging Locke's grave. We rarely see him getting his hands dirty, so to speak.

Frank: “This is the weirdest damn funeral I’ve ever been to.”

Locke once said that nothing on the island stays buried. Now he's buried on the island. Might a (proper) resurrection of some kind be in his future?

Randy was Hurley's boss at the fried chicken restaurant and Locke's boss in the island reality. Apparently, he's a dick regardless of the reality. 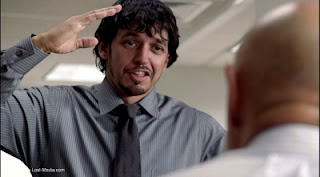 The woman that asked Locke what kind of animal he is was the fake psychic Hurley's dad took him to in season three's "Tricia Tanaka Is Dead". 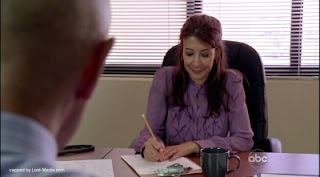 The last time Sawyer referenced "Of Mice and Men" was in season three, when Ben led him up the cliff to show him they were on the separate Hydra Island. Then, Sawyer cast himself as Lenny. Now, he's George.

The white and black stones on the scales inside the cavern recall the black and white stones found on the Adam and Eve skeletons in season one, as well as Locke's explanation of backgammon in the pilot. Presumably, Flocke chucked the white stone into the ocean because Jacob is dead, shifting the balance of power to the black stone. The scale recalls the Egyptian god Annubis' weighing the hearts of the dead. 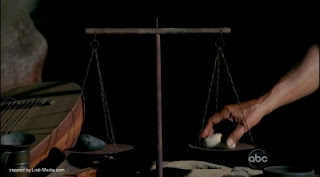 Sideways Locke, as a substitute biology teacher, is a man of science.

Lostpedia has a list of all the names visible on the cave walls.

Jacob's touch: As seen in last season's finale, Jacob's touch of the Losties seems to have marked them as candidates, and destined them to end up on the island.

Why do the Oceanic Six need to go back? Because they're all candidates.

Now we know what Aldo meant last week when he said Jin "might be one of them"; they don't know which Kwon is a candidate. And presumably, the Temple Others are concerned with protecting the Losties because they know they are candidates as well.

More on the numbers: The numbers correspond to the surviving Losties on Jacob's list of candidates. It remains unclear if this is how/why they derive their power, or if this is just one more example of their popping up in significant places.

Sideways Locke did lie to Boone in "LA X": he never went on the Walkabout, just like Island Locke.

Questions Asked
How much do we/should we trust what Flocke said regarding the candidates and their choices? Was Jacob truly manipulating the Losties, denying them their free will, or is that Flocke's skewed take on things? Was he telling the truth, the truth from a certain point of view, or outright lying? 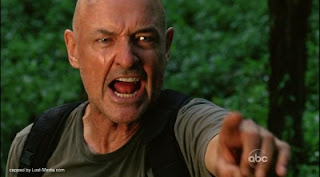 Why is Alt Locke apparently on speaking terms with his father? Did he not con him or push him out the window? How did Alt Locke end up in the wheelchair, then?

Why did Ilana scoop some ash out of Jacob's fire? Is it possible that Jacob has died and been cremated several times before, and the ash that protects against Smokey is Jacob Ash?

Why is Flocke stuck in the form of Locke now? Is it because Jacob is dead (since he took the form of Alex last season after assuming Locke's form)?

Who was the kid who appeared to Flocke? Young Jacob? Aaron? Why could Sawyer see him while Richard couldn't? Can only candidates see the dead people on the island (remember, Richard was intrigued when he met young Ben and was told Ben saw his dead mother). 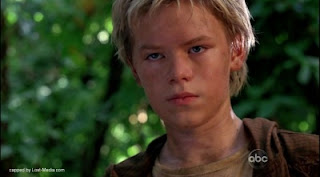 When did Jacob write the list of candidates? Have they always been there, and he crosses them off as time goes by? How does he determine who is or isn't a candidate? What, other than death, gets someone crossed off? In season three, when the Others saw flight 815 crashing, Ben tasked them with getting lists of the survivors. Did he bring these to Jacob, and Jacob cross referenced his list with Ben's? Was every survivor of 815 a candidate at one point or another?

When Eloise Hawking worked last season to get the Oceanic Six back to the island, was she working on the direct orders of Jacob?  Did she know they were all candidates?

Why wasn't Kate seemingly on the list of candidates? She was touched by Jacob. Did Flocke simply not point her out to Sawyer, knowing it might loosen his hold on him? If she is listed somewhere on the cave, what's her number, since all of The Numbers have already been assigned? Is she 108? Is she a wild card whose candidacy Jacob is keeping secret from Flocke by not writing her on the cave?

Is the Shephard on the cave wall referring to Jack? Could it mean Christian? Or even Aaron (who is, technically, a Shephard?) Could the Kwon refer not to Sun or Jin, but Ji Yeon? 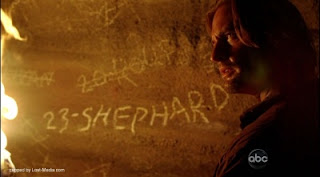 This question, asked last season, still stands: is there any significance to the fact that while both Hurley and Sayid are candidates, they weren't touched by Jacob until AFTER they left the island the first time?

Is Jacob the source of the numbers' power, or is this just one more example of their coincidental appearances?

Next Week: Lighthouse
The season one recall appears to continue, with a Jack episode to mirror season one's White Rabbit, and we catch up with Clairesseau. 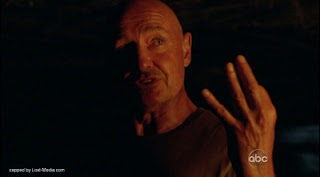