The callbacks to season one continue: Kate episodes are just as "meh" as they've ever been! While it was a bit fun to see a good old-fashioned track-through-the-jungle (another season one staple) on the island and to watch Claire and Kate quasi Thelma-and-Louise it in the flashsideways, the episode really didn't pick up until the last fifteen minutes or so. By then, the first, original Other, Ethan, popped up in the flashsideways, we learned that Sayid was infected and the Others need to kill him before it consumes him like it did Claire, and Claire herself popped up on the island doing her best Rousseau impersonation.

The word "infection" is a loaded one, hearkening back to, you guessed it, season one, when Rousseau used it to describe the state of her crew and husband shortly before she killed them. It was brought up again in

season two, with the quarantined hatch and Desmond believing the world outside to be diseased, as well as the flashbacks to what Ethan did with Claire when she was abducted in season one. After seeing Rousseau's crew follow Montand and Smokey under the temple last season, and emerge changed, the assumption was that "infection" was the best term available to Rousseau to describe the act of Smokey impersonating her dead crew. Now, it seems, there is something more to it than simple Somkey impersonation, though Dogen's use of ash when diagnosing Sayid suggests some kind of link between infection and Smokey.

After the jam-packed and intense season premiere, this episode was a bit of a letdown. Despite ABC's promos claiming the time for questions is over, "What Kate Does" raised more questions than it answered,

and showed that no matter the stakes, obfuscation and misdirection are as natural to the Others as bare feet. However, even in the final season, an episode shouldn't be judged purely on how many questions it answers, and accordingly, there was still a lot going on in this one. The flashsideways continued to hint at the significance of that reality, with several wide-eyed and possibly knowing looks from Alt Kate, and did well to re-introduce Claire into the narrative. Meanwhile, the island events brought further closure to the Sawyer/Juliet relationship (and possibly, the Sawyer/Kate one as well) and, with all the talk of "infection" and being "claimed", brought us closer to learning more about the fundamental nature of the island.

Stuff Worth Mentioning
Miles: “As you can see, Hugo here has assumed the leadership position, so... that’s pretty great.”

The title of this episode obviously recalls season two's "What Kate Did".

The plush whale Alt Kate pulled out of Alt Claire's bag was similar to the one Aaron was seen holding last season in "Something Nice Back Home".

The guy playing the mechanic who popped the cuffs off of Alt Kate played crazy vampire Kralick in the "Buffy the Vampire Slayer" season three episode "Helpless", as well as magic dealer Rack throughout Buffy's sixth season.

Dogen's spiel about how he has to stay apart from the people he leads sounds a lot like the business with Jack's tattoos, "he walks among us, but he is not one of us.” Might Jack realize that in order to save his friends, he'll have to do some things they don't like, making him among them but not one of them?

Speaking of the wretched "Jack's tattoos" episode, Sayid getting poked with the hot poker reminded me of Juliet getting branded as punishment for killing Pickett. Probably more of a thematic connection than a literal one, but there it is...

When learning that Sayid was alive, Dogen touched the scroll around his neck. He also did this when Hurley told him Jacob sent them last episode. What's the deal with the scroll?

The infection, Ethan, Rousseau and her traps were all further callbacks to season one.

If memory serves, Kate knocked out Aldo in season three when she, Sawyer and Alex busted Karl out of room 23. Aldo was reading "Brief History of Time" and fell for the old Wookie prisoner gag. Clearly, he's still bitter about it.

I liked the Other that was with Aldo, Kate and Jin. He seemed nicer and more forthcoming than most Others. A shame Clairesseau shot him...

The alias Alt Kate used in the hospital (Joan Hart) was the same one used by Kate in a season one's "Born to Run" when she visited her mother in the hospital.

Dogen's comment about the baseball, "it's a baseball", reminded me of Richard's answer to Locke's question about the compass last season: "it points north."

The character focus of the season six episodes appears to mirror the season one episode: the first two focused on the plane/group as a whole from Jack's perspective, while the third episode of each was a Kate episode. Next week's episode looks to be a Locke/Flocke episode, mirroring episode four's Locke-centric "Walkabout". It will be interesting to see if this parallel continues, especially since season six has fewer total episodes and some of the character centric episodes from season one featured characters that are now dead.

Questions Answered
Not so much, this time around.

I suppose, at this point, we can safely assume that Ethan used the last name "Rom" rather than Goodspeed simply because he didn't want to give the Losties his real name (and because the producers wanted an "Other Man" anagram, and the Amy-Ethan connection came about later).

Oh, and Dogen's comment to Jack suggests that all the Others, at one point or another, were brought to the island.

Questions Asked
It's probably not important, but how was the torture administered to Sayid diagnostic? What did it tell the Others?

What did the Others need so desparately to talk to Jack about last week (before Sayid revived) that they completely forgot about this week?

If the pill was simply poison intended to kill Sayid, why did Dogen say he had to take it willingly? Was he just effing with Jack? Trying to further Jack's character development? Does this have to do with the overarching "free will vs. destiny" themes?

Is Aaron's intended adopted family in the flashsideways important? Is the husband that left his wife someone we know (or was he forced to leave by someone we knew, trying to keep Aaron with Claire)? Or should we just let this one go too?

The date on Alt Claire's ultrasound was 10/22/2004, a month later than the original flight 815. Is that date a production error, Claire's due date, or a further clue that the flashsideways reality is different from the prime reality? 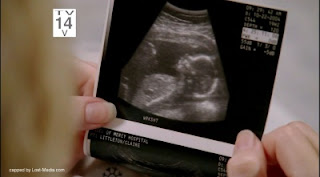 So infection, huh? How does this relate back to Rousseau and her crew? Is Clairesseau infected, as Dogen says, or just crazy? Did she get infected in "Shape of Things to Come" and that's why she was weird and Miles was reacting to her so strangely (kinda like he was to Sayid when he revived)? How is the infection related to Smokey? Is it? The last time we saw Claire, she was with Christian. If she is infected, does this further align Christian with Smokey?