Airplane Gets a Nose Job

Alright, so apparently this airplane landed at an airport with a dented done. The thing is, nobody claims to know what caused the dent. And this is no minor dent, either, it's a dent that...well...looks a little something like this: 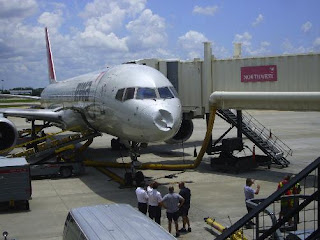 Hmmm...that's an awfully large dent for nobody to know what happened. But the FCC claims that it's a mystery.

So, what really happen to this airplane? What could have caused such a large dent in the nose? Nobody knows, but I have a few ideas:

1. A meteorite
2. A giant flying ostrich wearing an oxygen mask
3. A freak rip in the space-time continuum
4. A huge release of electro-magnetism originating from a mysterious, moving island's 'hatch'
5. Superman was flying while intoxicated...again...and wasn't watching where he was going
6. The Klingons just declared war on the human race
7. The pilots accidentally hit God's mailbox and won't admit it
8. Upon finding out the in-flight movie was "The Love Guru" the airplane nobly attempted to sacrifice itself for the good of all the passengers

All of those possibilities are plausible, but what's the truth? Who knows? But you can all vote on which one you think it is on your left. You can also vote 'Something Else' if you'd like and leave a comment on what else you think this could be.

Whatever it is, I'm sure we can all agree that a giant government conspiracy is somehow involved.
Newer Post Older Post Home
Posted by Dr. Bitz at 12:03 AM