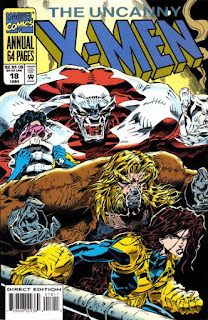 In a Nutshell
Shadowcat & Sabretooth rescue Jubilee from Caliban

Plot
Caliban steals food from a group of young campers in order to feed Jubilee, whom he's abducted and is holding in the Morlock Tunnels. At the mansion, the X-Men discuss the note he left behind, demanding that Kitty Pryde bring him Sabretooth in exchange for Jubilee. After Kitty arrives from Scotland, Xavier & Jean convince Sabretooth to help her retrieve Jubilee, though they have no intention of handing him over to Caliban. Sabretooth leads Kitty to Caliban, who floods the tunnel, telling Kitty to phase while Sabretooth drowns. But Kitty saves Sabretooth, at which point a massive squid attacks, knocking out Caliban. Sabretooth manages to kill it, saving them all, but then he tricks Kitty into phasing so he can pass his manacles through her arm, disrupting their electronic mechanisms and setting himself free. Unrestrained, he viciously attacks Caliban, but Jubilee intervenes, blinding him and helping Kitty get him back into his restraints. Kitty then asks after Caliban, but he tells them to leave, insisting that he's destined to always be alone.

2nd Story
Bishop uses the Danger Room to recall an old mission involving himself, Malcolm & Randall. As the sequence ends, he admits to himself that while everyone insists he needs to let go of his past, it isn't always easy. Just then, Jubilee enters and asks him to go rollerblading. He declines, then reconsiders, asking if they could go for a walk instead, and she happily agrees.

Firsts and Other Notables
This issue marks the return of Caliban, last seen at the start of "X-Cutioner's Song" getting duped by Mr. Sinister into capturing Cyclops & Jean Grey, setting the stage for his return to a regular role within the X-books (not seen since the early days of X-Factor). A few months after this issue, he will pop up over in Cable, which in turns paves the way for the character to join X-Force, where he'll stay for a long run of issues in that series. 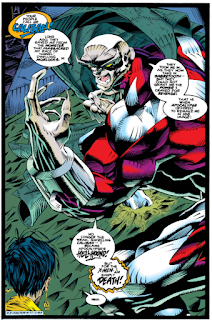 Stevie Hunter appears briefly in this issue (it turns out Jubilee was abducted by Caliban after leaving one of Stevie's dance classes); this marks her last appearance to date (though chronologically, her appearance in X-Men #30 takes place after this), which is a shame considering the character's previous semi-regular appearances in the X-universe. 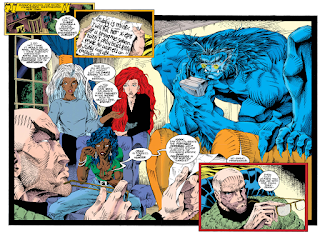 This is the last numbered Uncanny X-Men annual, as all annuals will switch over to a "numbered by the year they're published" schema next year, while the focus on Caliban and the involvement of Sabretooth in the main story represents this issue's contribution to the loose "villain-centric" theme of the '94 annuals.

The second story (which is a really nice little elegiac thing in which Bishop deals with his grief over the deaths of Malcolm & Randall) comes from the writer/artist team Jeph Loeb & Tim Sale. Loeb will, in a few months time, become the new regular writer on Cable and then X-Force, and eventually become known for writing both some highly-acclaimed stories and some notoriously awful stories before becoming one of the main shepherds of Marvel's TV properties for Marvel Studios. Sale, in turn, is mostly known for his collaborations with Loeb, including Batman: The Long Halloween and the various era-specific "color" series for Marvel (Daredevil Yellow, Spider-Man Blue, etc.), as well as providing the in-show art for TV show Heroes. While this isn't their first collaboration together, I do believe it is their first work together for Marvel, and they will create a Wolverine/Gambit limited series for the X-office in 1995.

Amongst the usual annual backmatter is a pinup by Steve Skroce, who will shortly become the first regular penciler on Cable. 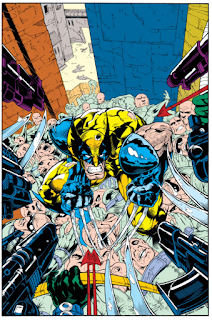 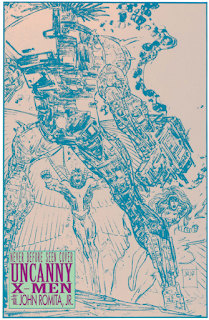 Creator Central
Continuing to find work in the X-office, Ian Churchill pencils the main story in this issue. For what it's worth, this is the point where his artwork first looks to me like what I think of when I think "Ian Churchill art".

The Chronology Corner
This issue takes place just before the Scott/Jean wedding, between X-Men #29 and X-Men: The Wedding Album (presumably, Kitty just stays in town after the issue for the wedding, then flies home with the rest of Excalibur).

A Work in Progress
Caliban refers to Jubilee as "Spark Child", a nice callback to his original, more innocent dialogue which had mostly disappeared after his conversion to one of Apocalypse's Horsemen.

Caliban's kidnapping letter says that Kitty has to deliver Sabretooth, as she's the only one of the X-Men he trusts, another nod to past continuity.

It's said that Kitty will be on the first flight from Heathrow; not sure why she isn't taking one of Excalibur's high tech vehicles instead of flying commercial.

Apparently, a giant squid lives in the Morlock Tunnels. 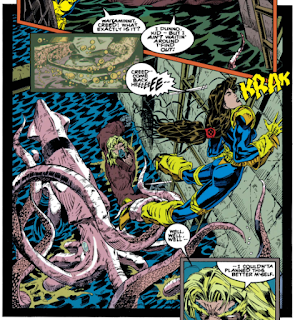 Having spent most of the post-Mutant Massacre period aboard/part of Excalibur, this is the first time Kitty has seen Caliban since the transformation/power upgrade he received from Apocalypse. 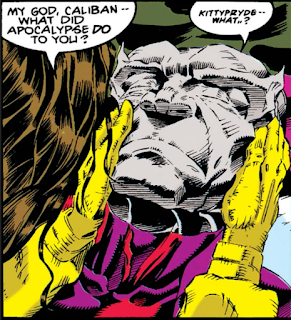 During their fight together, Sabretooth notes both the scar Caliban received fighting Archangel (in X-Factor #53) and the time Caliban broke Sabretooth's back (in New Mutants #91). 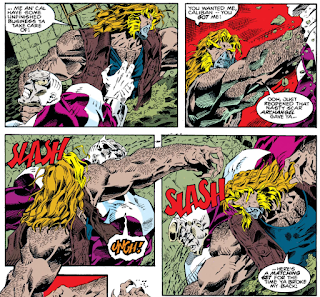 In the second story, it's noted that the XSE exists as a way to let mutants protect mutants.

Malcolm uses the oath "motherless decedents of Mesmero" and while that's a dig on Mesmero, hey, at least he's being remembered decades in the future.

The Reference Section
The group of young boys camping which Caliban attacks in the opening pages of the story seem distinct enough to possibly be a reference to something particular, but I can't for the life of my determine what, if anything (part of me wonders if it's meant to be an homage to the teen horror anthology series Are You Afraid of the Dark?, which aired on Nickelodeon in the mid 90s, but that's just because it's teens sitting around a fire, and that seems tenuous, at best). 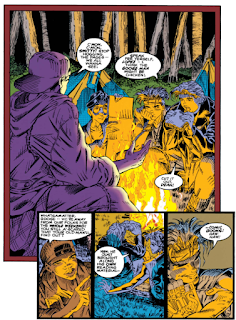 The Grim 'n' Gritty 90s
An upside-down Jubilee worries about losing her Ray-Bans (which may be a case of dialogue covering for art).

It what is possibly the most 90s thing ever, this issue reveals that Kitty's uniform contains stealth transforming nunchuks. And look, this is clearly so kewl it rolls my eyes right out of my head, but at the same time, it is the one single thing I remember most about this issue. Like, if at any point in time someone were to ask me "what happens in Uncanny X-Men Anuual #18?", before anything else, I'd say, "well, it turns out Kitty has nunchuks on her costume". 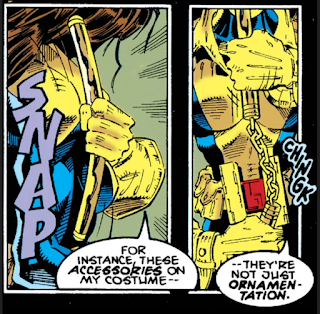 Claremontisms
Kitty tells Sabretooth she learned to defend herself "body and soul" from Wolverine years ago. 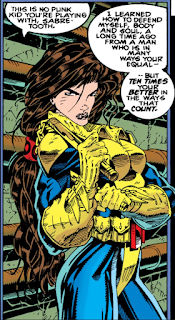 "Professor Xavier is a jerk!"
In the wake of having betrayed Colossus (for his own good, ultimately) in Excalibur #71, Kitty takes Xavier for task for him asking her to once again betray a friend for the greater good. 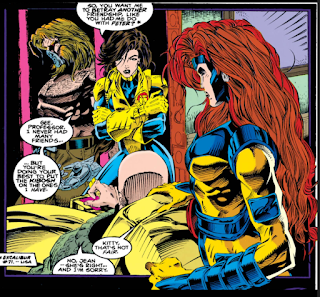 Austin's Analysis
It's tough to argue that this is a terribly good story, but I really love the way it takes a bit of the current status quo (Sabretooth living in the mansion) and uses it as an excuse for a deep dive into continuity to come up with its premise. "Enemies/Victims of Sabretooth targeting the X-Men" is one of those slam-dunk story ideas that immediately presents itself after Xavier decides to try and treat Sabretooth, and by casting Caliban as the (rightfully) aggrieved figure, Herdling draws on a wealth of continuity points, from the Morlocks' abduction of Kitty to serve as Caliban's bride way back in issue #179, to the Mutant Massacre, to Caliban's defection to Apocalypse during "Fall of the Mutants", to his battles with Archangel and Sabretooth in Simonson's late pre-relaunch X-Factor and New Mutants.

Next Issue
Tomorrow, the X-Men head into space in X-Men Unlimited #5. Friday, Cable battles a ghost of the past in Cable #12. Next week, retro X-aminations begin again with Fantastic Four #28.
Newer Post Older Post Home
Posted by Austin Gorton at 12:00 PM