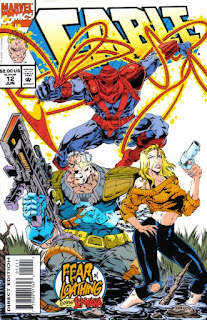 In a Nutshell
Cable & Lee Forester battle a resurrected Senyaka.

Plot
Lee Forester, the last surviving member of her crew, fights off their killer, Senyaka, until Cable suddenly arrives in response to a distress call she placed to the X-Men. Though Senyaka manages to disable Cable's bionics, Lee knocks the distracted villain out, and she & Cable flee deeper into the Florida Everglades. Unable to teleport them to safety, Cable & Lee brace themselves for Senyaka's attack. When it comes, Cable is able to telekinetically hurl a battery of sharpened sticks at him, killing him. But their victory is short-lived, as Cable points out they're still stuck in the alone in the wild, with no food, supplies, weapons or means of contacting anyone for help.

Firsts and Other Notables
This issue reveals that Senyaka, the former Acolyte/Cortez guardsmen who was killed by Magneto in Uncanny X-Men #304 as an object lesson in loyalty to the other Acolytes, managed to survive that assault.

After appearing briefly last issue, Lee Forester, commercial ship's captain and former paramour of both Cyclops & Magneto, takes center stage here as Senyaka attempts to kill her due to her past relationship with Magneto 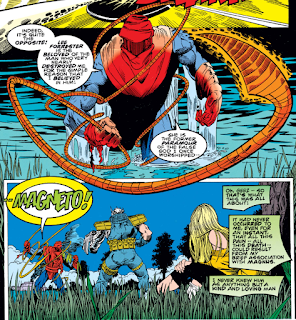 At the end of the issue, Cable is able to telekinetically hurl a handful of stakes into Senyaka, seemingly killing him again (but he'll be back...). 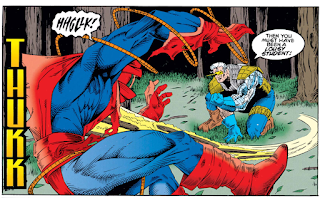 Creator Central
Plot credit for this isssue goes to Scott Lobdell, pulling an Exalibur on the series, while Glenn Herdling sticks around from the previous story to script it.

The cover to this issue is from Steve Skroce, who will soon become the series' first regular penciller.

Chronology Corner
Cable's wedding-related appearances in Uncanny X-Men #310 and X-Men #30 occur between last issue and this one.

A Work in Progress
It's said that Senyaka survived by draining psionic energy from the doctors attending him, which is apparently a power he has now (also, maybe those SHIELD doctors could have stored his whips in another location...).

During a lull in Senyaka's attack, Cable tells Lee about how Magneto has changed since she saw him last (which was all the way back in Uncanny X-Men #196, though they didn't directly part ways in that issue - she is also considered present behind the scenes in X-Men #199 - so presumably they split up off-panel sometime after that). 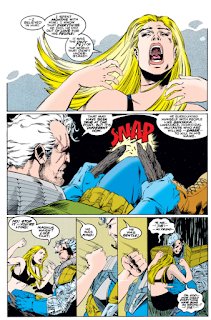 At one point, Cable tells Lee he can’t teleport them because Senyaka’s psionic attack has knocked out his connection to Professor, but Professor exists as part of Cable's consciousness since X-Force #25. 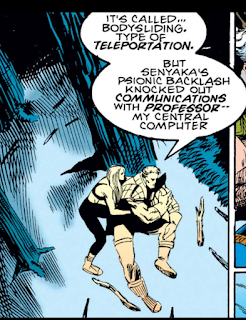 To the EXTREME!
Lee is shocked that Cable is prepared to kill Senyaka outright. 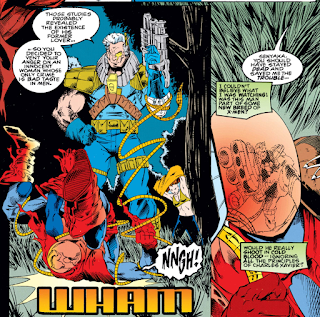 The Cable Guy
Senyaka is able to sense that Cable’s bionic parts are more than just metal.

Austin's Analysis
Putting aside the resurrection of Senyaka (which is both ridiculous & unnecessary), this is a solid start to a story built around a bit of character interaction that is suprising to see: Cable and the long-forgotten Lee Forrester. Using Lee's past association with Magneto as the inciting incident for her being attacked by a disgruntled Acolyte is a clever use of continuity (even if it means, oddly, that Cable is spending two consecutive stories fighting the Acolytes in some capacity), while pairing up Lee & Cable is similarly inspired, given her past relationship with Cable's dad (if anything, Cable's involvement in this story - in his own series - is the most random part of it: he just happens to have intercepted Lee's call to the X-Men for help and decided to respond). Subsequent issues will explore the Lee/Cable dynamic a bit more, with this one instead continuing the previous issues' occasional horror vibes as Lee & Cable fight off the relentless Senyaka, but in remembering Lee Forrester exists and mining her past relationships for plot & characterization, Lobdell & Herdling help the series continue its gradual improvement.

Next Issue
Next week, Retro X-aminations return with the X-Men fighting the Fantastic Four, the Mad Thinker, the Puppet Master, and the Awesome Android in Fantastic Four #28.