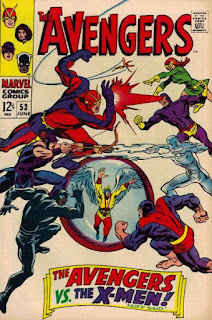 In a Nutshell
The Avengers help the X-Men defeat Magneto.

Plot
Spotting Cyclops standing over an unconscious Quicksilver, the Avengers, having been brought to the island by Angel, whom they left aboard their ship after discovering an electronic bug on him, are suspicious, and Cyclops responds to their suspicion by attacking them.Watching over a monitor, Magneto is pleased the Avengers have arrived & found the bug he planted on Angel before Angel escaped. After Cyclops escapes from the Avengers, they turn on each other, bickering, as Magneto uses his mind control device to set the X-Men against the Avengers. The Avengers manage to defeat the X-Men, but Angel, revealing that the Avengers' distrust of him and their infighting was all a ruse to lull Magneto into false confidence, manages to destroy Magneto's device, restoring the X-Men to their senses. Together, the two teams attack Magneto, but he flees along with the rest of his Brotherhood. However, as their escape craft leaves the island, Toad, fed up with the abuse he suffers at Magneto's hands, kicks him out of the craft, causing him to plunge into the water below, and disappear.

Firsts and Other Notables
This issue is part of a crossover between the Avengers and X-Men, concluding a story which began in X-Men #43 and continued in issue #44 and #45 (which led directly into the opening pages of this issue). It represents the first direct crossover involving the X-Men (in that, a story which began in one series continues and/or concludes in another, as opposed to just the X-Men guest-starring in another book), and the first direct X-Men/Avengers crossover (both series will repeat the feat as part of their respective 30th anniversary celebration in 1993's "Bloodties", which, like this story, also involves Magneto & his followers/family).

It also marks the end of the brief return engagement for Magneto's original Brotherhood of Evil Mutants (albeit a whittled down version of it), which reformed over the course of Avengers #47-49, following Magneto's second (and final) escape from the Stranger's planet. In the course of that story, Magneto tricked/manipulated Quicksilver & Scarlet Witch into joining him (Toad, of course, was along for the ride) in attempting to create an island haven for mutants (but he really plans to create a computer on the island with which to enslave mankind). Though ultimately a sham, Magneto's "island haven" is later echoed in Avalon, his rebuilt space station meant to serve as a refuge for his followers, and the X-Men's Utopia, their post-Decimation island home (formed, in part, from the remains of Avalon).

Magneto is defeated in this story by Toad, who finally gets fed up with the abuse heaped on him by Magneto, and more or less kicks him out of the Brotherhood's escape vehicle. This marks the end of Toad's days as Magneto's lackey, as he will operate on his own for awhile, before eventually forming his own version of the Brotherhood in the 90s. Magneto will next appear in X-Men #62, in the Savage Land (appearing there without his helmet on for the first time), while the trio of Toad, Quicksilver & Scarlet Witch pop up in X-Men #59, captured by Larry Trask's Sentinels, with Quicksilver & Scarlet Witch eventually rejoining the Avengers in Avengers #76. 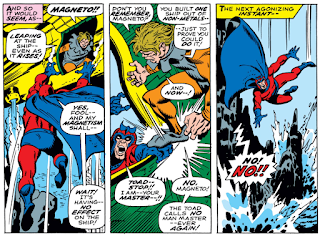 The Avengers lineup in this issue consists of Black Panther, Hawkeye, Goliath, and Wasp. Not the most powerful assemblage of Avengers ever, but also not the weakest (I tend to prefer my Avengers teams to have more members, though of course the then-recent "Cap's Kooky Quartet" era had entrenched a four member team as a perfectly reasonable option).

As of this issue, Black Panther had just joined the team for the first time, taking over for Captain America, to the point where Cyclops doesn't recognize him as one of the Avengers (Hercules, whom Cyclops name drops, had also recently left the team). It's also during the time when Black Panther is just called “The Panther”, so as not to draw allusions to the then-ascendant Black Panthers organization. 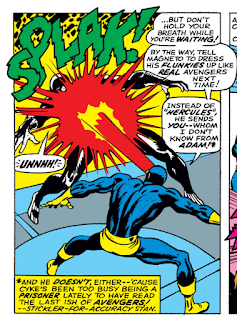 Collection Recollection
This issue was reprinted in Avengers #350 (ostensibly because Cyclops & Professor X guest-starred in that issue and it dealt, in part, with the threat of Magneto's Acolytes), which is the first place I read it. Serving, as it does, as the conclusion of a four part story, and with the first three part under-reprinted at the time (so I had no recourse to read them), I was deeply confused as to why the Avengers were randomly attacking Cyclops at the start of the issue.

Creator Central
This issue is part of the seminal Roy Thomas/John Buscema Avengers run (with Thomas having departed from X-Men after kicking off the story in X-Men #43), during which a ton of classic stories occur and long standing characters/concepts are created.

A Work in Progress
In X-Men #45, an arrow is pointed out in the wall above Quicksilver & Cyclops, shortly before the two start fighting, with a footnote saying its presence will be explained; this issue provides that explanation (Hawkeye is using it to eavesdrop on their conversation on behalf of the Avengers. I know, I'm as stunned by that reveal as you are...). 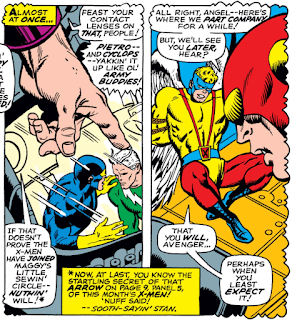 Toad asks Magneto why he is so mean to Toad when Toad is so loyal to him, setting up his later betrayal at the end of the story. 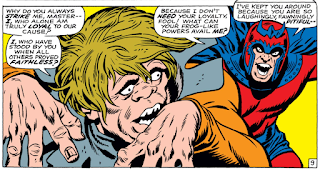 Ah, the Silver Age
Toad is able to kick Magneto off the Brotherhood's ship because Magneto built it out of non-metal material, just to prove he could (you might say, putting aside the inherent stupidity of the idea, why not just make the ship out of non-magnetic metals ie most metals, but of course, in the Marvel Universe, all metal is magnetic, apparently).

"Professor Xavier Cyclops is a jerk!"
Freed from his contractual need to be a confrontational jerk in order to start the issue off with some action, Cyclops eventually realizes that, duh, the Avengers are here because Angel reached them.

Human/Mutant Relations
Upon arriving at Avengers mansion (and, admittedly, not just knocking on the front door), Angel attributes their wariness towards him to anti-mutant prejudice. 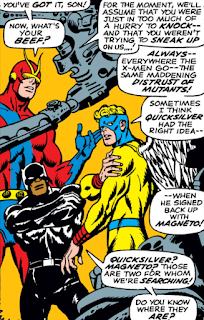 Austin's Analysis
It's kind of a shame that I skipped this issue the first time around, because some Silver Age nonsense aside (like the Avengers deciding to fight one another mid-issue; even if it was all a show for Magneto, it was still pointless filler), it's actually a pretty decent conclusion to the X-Men's first proper crossover, one which also writes out their biggest enemy to date for another solid chunk of time. Of course, in contrast to their appearance in Fantastic Four #28, the X-Men get sidelined and/or act like jerks throughout the issue, but at a time when their series was featuring some pretty lackluster art, it's great to see them drawn by the great John Buscema at the height of his Silver Age powers, even if the Avengers are one-upping them. Plus, the conclusion, in which Toad finally turns on Magneto, is genuinely surprisingly yet built on previous continuity (so that, non-metallic vehicle aside, it doesn't come completely out of nowhere), and is a clever way to end the villain's threat du jour while more or less putting the nail in the coffin of this version of the Brotherhood of Evil Mutants. Basically, while this may be an issue of the Avengers, it's probably the best comic featuring the X-Men between the end of the Factor Three Saga in X-Men #39 and the arrival of Jim Steranko in X-Men #50.

Next Issue
Next week, a pair of X-Men (and the Hulk) fight a robot in space, in Hulk Annual #7.
Newer Post Older Post Home
Posted by Austin Gorton at 12:00 PM