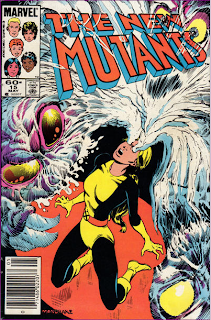 In a Nutshell
The New Mutants take a bus to rescue Kitty from the White Queen.

Plot
Worried that no one has heard from Kitty since she left for the Massachusetts Academy with Doug Ramsey, Illyana casts a spell and travels via her astral form to the school. In the secret complex beneath the school, she discovers that Kitty is a captive of the White Queen. She overhears White Queen's intention to turn Kitty and Doug to the side of the Hellfire Club before she's detected and forced back into her body. The backlash from the White Queen's attack causes Illyana to lose control of her psychic familiars, sending demons flooding out into the school. The New Mutants manage to fight off the demons, who disappear when attacked, then confront Illyana. She admits to being a sorceress and tells them about Kitty's situation. With Professor X and the X-Men missing, the kids reach out to the Fantastic Four and the Avengers, but both teams are similarly unavailable.

Deciding they'll have to help Kitty on their own, they pool their money and purchase bus tickets to the academy. En route, Dani studies the X-Men's files on the Hellfire Club while Sam attempts to convince Rahne her mutant abilities don't make her evil. Later that evening, the New Mutants emerge seemingly undetected in the underground complex of the Massachusetts Academy via a tunnel Magma burned through the earth. They discover the still-captive Kitty, but she turns out to be a holographic illusion, at which point the White Queen reveals herself. As she claims the New Mutants for the Hellfire Club, Illyana vows that if she's harmed Kitty, she'll use her magic to send the school to Hell.

Firsts and Other Notables
Though we don't know it, the uniform Kitty is wearing while a captive of the White Queen will be revealed next issue to be the standard uniform of the Hellions, the Massachusetts Academy's answer to the New Mutants. 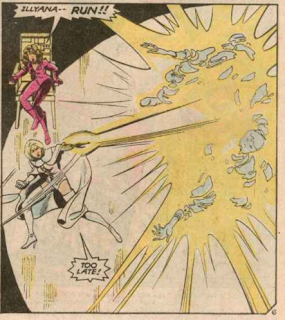 Illyana isn't able to keep her sorceress abilities secret for long, as the New Mutants are made aware of them in this issue.

Having been given instructions to contact the Fantastic Four or the Avengers if the X-Men aren't available during an emergency, the New Mutants contact both teams but are told they are away. Like the X-Men, they have been caught up in the events of Secret Wars (though if I remember my Avengers from this era correctly, I believe Vision, at least, should still be at Avengers Mansion). 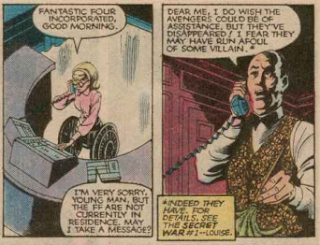 In New York, waiting to catch the bus, Roberto and Rahne find themselves drawn to Cloak and Dagger's church, another reference to the events of Marvel Team-Up Annual #6 and a setup for a future New Mutants story. 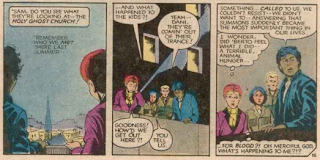 Sam specifically mentions his brother Josh, the first reference by name to this sibling who will eventually become part of the X-Men's third generation of teenaged students in the post-Morrison New X-Men.

A Work in Progress
White Queen describes exactly what Mastermind did to send her into a coma in X-Men #169. 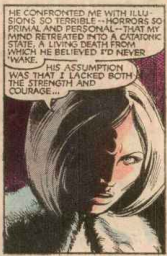 He hasn't mentioned it much lately, but Sam continues to have difficultly turning while blasting, and is upset that newcomer Amara has already made so much progress learning to control her power (and thankfully Amara has gained better control; a "lava blast" is a much easier offensive use of her power than tossing up volcanoes wherever she goes...) 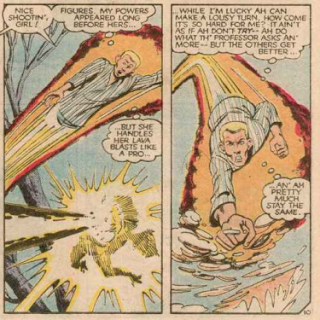 Dani perceives Illyana's Darkchilde persona, though the depiction of it is different than in the Magik series. 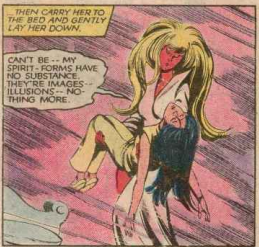 Kitty is able to see Illyana's astral form, the meaning of which is unclear to Illyana. 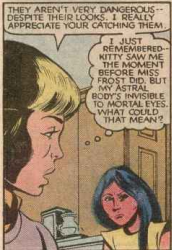 Roberto once again mentions getting someone's autograph for his "sister". 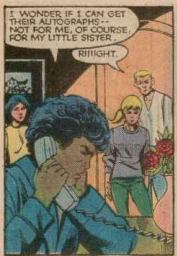 The New Mutants consider driving Professor Xavier's Rolls Royce to the academy, but decide that a bunch of teens in a car like that would be too conspicuous, and since none of them have a drivers license, they can't risk getting pulled over.

Sam and Dani have a discussion on the bus about leadership, with Dani acknowledged as the group's leader. 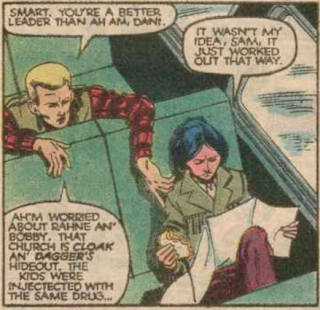 Sam and Rahne have a great conversation in which the Bible-reading Sam forces Rahne to question some of the values brought on by her fundamentalist upbringing, insisting that her powers don't automatically mean she's evil.

I Love the 80s
On the bus, Dani is looking over printouts from the X-Men's computers regarding the Hellfire Club. 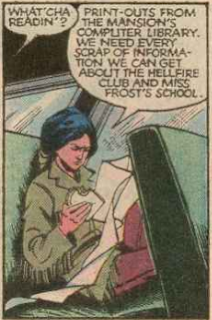 Artistic Achievements
There's a neat panel where Illyana's scream following the White Queen's attack on her astral form is depicted as large letters, each forming a panel containing one of the New Mutants responding to the cry (I'm also impressed that Dani isn't shown to sleep in a skimpy negligee or something).

At the other end of the artistic spectrum, something about the pale green background in this panel undercuts Dani's assertion that the room is so dark she can barely see Illyana.

Young Love
White Queen telepathically makes Doug believe he's interacting with Kitty, when in reality he's talking and embracing nothing, which, aside from being a dick move, is pretty telling regarding his feelings for Kitty. 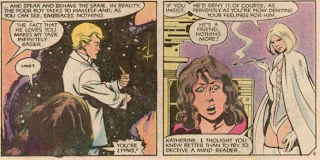 They're Students, Not Superheroes
With all the adult heroes missing, Stevie on vacation, Illyana's teleportation ability too unpredictable, and no one with a drivers license, the New Mutants are forced to pool their money and take a bus to rescue Kitty.

My Hero, Thomas Magnum
Illyana/Kitty has a poster of Magnum in their bedroom (and stuffed Garfield, apparently). 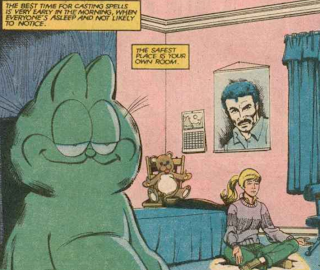 Teebore's Take
After the interminable "Nova Roma" story and a pair of issues developing the characters, Claremont gets down to his next multi-part story (albeit one that's a far more manageable three issues), one that will introduce the New Mutants chief antagonists for the duration of Claremont's run (and beyond). But more on them next week. In the meantime, Claremont takes advantage of Secret Wars to really push the idea of the New Mutants being students first, and not superheroes, cleverly and thoroughly detailing their attempts to find adult, professional help for Kitty before going into action themselves, forced to take a bus to the rescue after all other means of transportation are checked off as being unavailable or unfeasible.

It's both a nice callback to the days of the teenaged original X-Men busking for plane fare to rescue Professor X and a reinforcement of just what makes this book so unique. The Avengers once had to take a bus to confront a mad god-like being (in the well-regarded "Korvac Saga") but that was due to complications with their government clearance, a problem that befalls only the most professional and legitimate of heroes. Here, the New Mutants are presented first and foremost as a group of kids, ones who just happen to have super human powers, who want to help their friend but, like any ordinary teenagers, lack the means to do so efficiently. Granted, in the grand scheme of things "forced to ride a bus" is a relatively small plot device, but it's probably the best use of the book's "not traditional superheroes" setup yet.

Next Issue
We find out just what the X-Men are up to in Secret Wars #1-12
Newer Post Older Post Home
Posted by Austin Gorton at 9:30 AM