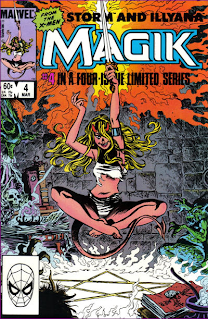 In a Nutshell
A look at the seven years Illyana spent in Limbo.

Plot
Issue #1: At the mansion, Illyana watches the sun rise and thinks back over her time in Limbo. After successfully preventing the X-Men from rescuing her, Belasco fashions a piece of her soul into a Bloodstone, thus bonding her to him forever. However, older versions of Storm and Kitty Pryde, called Cat, stranded there from an alternate timeline in which Illyana escaped Limbo but the X-Men remained behind, rescue Illyana and take her to Storm's protected garden. There, Storm decides to take Illyana as her apprentice, teaching her sorcery in order to one day free her from Belasco's influence and send her home. They begin training as Illyana grows older, but she has difficultly overcoming the corruption of Belasco, tainting her attempts to transform her power into life with darkness. One night, Cat steals into the garden and promises Illyana she can return her to Earth. Together, the two run off.

Issue #2:  Fighting their way across Limbo towards Belasco's citadel, Cat teaches Illyana combat and survival skills. They reach the citadel, Illyana having grown three years in the ensuing time, and an astral projection of Storm begs Cat to allow Illyana to continue her training, but Cat refuses. Inside the citadel, they encounter Belasco's warped servant Nightcrawler and kill him, but Belasco prevents them from returning Illyana to Earth. He transforms Cat into a more animalistic creature loyal to him, then instructs Illyana to create another Bloodstone. Overcome by a desire to please him, she does so, and Belasco tells her she will now complete her training as his apprentice.

Issue #3: Years later, Illyana has mastered Belasco's dark arts, but remains unable to perform magic that isn't corrupted by evil, and thus unable to free herself of Belasco's corruption. Visited by Storm's astral form, she urges Storm to help her defeat Belasco before she becomes even more evil. Searching for a way to move about without Belasco's knowledge, Illyana discovers her ability to teleport through time and space via circles of light. When she arrives back at the citadel, she sees Storm attacking Belasco. She joins the fray, and is forced to kill Cat, but Belasco defeats Storm. He vows to conjure a third Bloodstone from Illyana, then sacrifice Storm's soul as well. 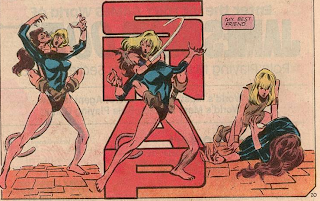 Issue #4: Horrified at killing Cat but pleased by Belasco's approval, Illyana ultimately kills Storm before Belasco can take her soul, teleporting away with her body. She unintentionally arrives at her parents home in Russia, but they don't recognize the older Illyana as their daughter. Illyana is then pulled back into Limbo by Belasco, who fashions a third Bloodstone from her soul before casting her into the wilderness of Limbo, telling her he'll summon her when he needs her. Taking shelter in the last remnants of Storm's garden, she draws on the power of an oak tree to stay alive and attempts to bond her life force to the natural elements around her, but as before, the results are tainted. Illyana realizes she needs a literal weapon to defeat Belasco. Using the last of the oak's power, she casts a spell which creates a sword containing all her power. With the weapon in hand she teleports to Belasco and attacks. She easily gains the upperhand, becoming more demonic in appearance as Belasco grows weaker and more human. Refusing to fully become like him, she spares his life, but his defeat at her hands leaves Illyana the ruler of Limbo, and Belasco flees to Earth. Realizing that like her sword, Illyana is a weapon of magical power and thus must return to Earth to one day face Belasco again. As her reverie ends, Illyana watches the New Mutants playing in the snow, and resolves that despite everything she's been through, she'll try to do the best with what she has left.

Firsts and Other Notables
Illyana's mutant ability to teleport via circles of light she calls stepping discs (taken from a name Kitty read in a book, another nod to Larry Niven) is revealed. It's established that she is able to travel through both space and time via the discs, though as with many young mutants and their powers, her control over where and when she teleports is limited. 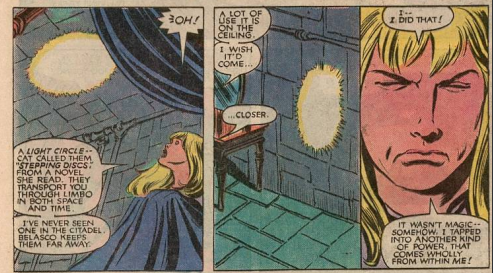 In issue 4, we see the creation of Illyana's Soul Sword, which first appeared unnamed in Uncanny X-Men #171. Though its established as being representative of her sorcerous powers, the full extent of its abilities aren't revealed, and it functions mainly as a regular sword throughout the issue. 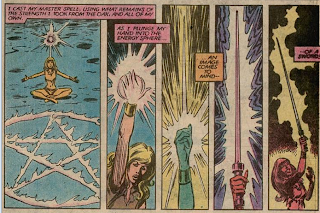 In the course of her battle with Belasco, Illyana manifests her Darkchilde persona for the first time, in which she gains a more demonic appearance (including horns and a tail) as she overpowers Belasco. Later stories will establish that the more Illyana uses magic and the more corrupted she becomes, the more demonic she'll appear, and the harder it will be for her to disguise it. 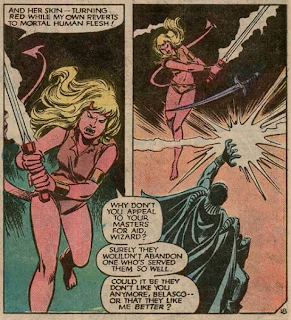 Issue #4 reveals that Illyana overthrew Belasco and chased him out of Limbo before returning to Earth in Uncanny X-Men #160, making her the functional ruler of the realm.

Illyana's middle patronymic name is correctly given as Nikolovna (daughter of Nikolai).

Throughout the course of the series, we see the creation of three of the bloodstones, formed from pieces of Illyana's sould, which reside in her locket; when the fourth and fifth are created, the Dark Gods will be able re-enter Earth through Illyana. 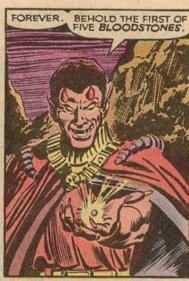 Though the young Illyana of this series doesn't recognize them, in issue #3 she encounters the New Mutants and Stevie Hunter in Limbo; we'll see this encounter from their perspective in New Mutants #14.

Similarly, S'ym is seemingly slain by Illyana in issue #4, but New Mutants #14 will reveal he survived.

In issue #4, Belasco refers to events occurring in Ka-Zar #29 (according to a footnote); I have no idea what that's all about. 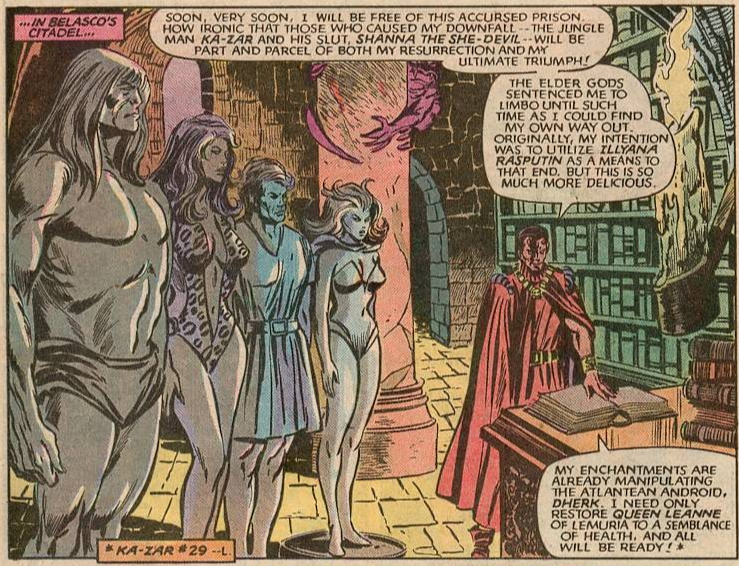 Art from this series comes from a trio of pencilers, John Buscema, Ron Frenz and current New Mutants penciler Sal Buscema, but all three are inked by Tom Palmer, who manages to bring a unifying look to the entire series (Frenz's pencils are a little bit looser in issue #3, and some of Sal's trademark trapezoid mouths pop up in #4, but otherwise, you'd be hard pressed to notice a difference in the art).

This series is alternately referred to as the Magik limited series, or the Storm and Illyana series, or some combination thereof. I've most often heard it called the former, so that's what I'm titling the post. The indicia lists the official title as Magik (Illyana and Storm Limited Series)

A Work in Progress
After writing issues containing first person narration from Wolverine and Mystique, Claremont gives this series a fair number of first person captions from Illyana.

The Kitty Pryde from an alternate timeline that resides in Limbo is called Cat, and has been transformed into a more cat-like creature, before being entirely reduced to an animal state by Belasco in issue #3. 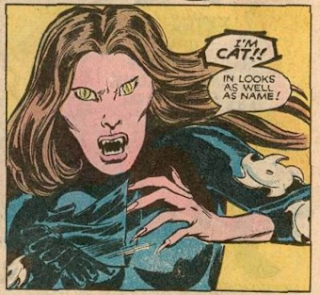 At one point, Illyana is able to teleport to her parents home, but they don't recognize the older girl, insisting their young daughter is with her brother in America. 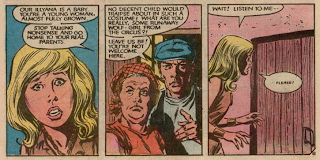 Later, back on Earth, Illyana notes that she hasn't tried contacting her parents, unwilling to go through that again, which is likely an attempt on Claremont's part to explain why he hasn't shown grown up Illyana returning home at any point.

At the end of issue #4, Illyana states its been a year since she returned to Earth in Uncanny X-Men #160, though of course the sliding Marvel timeline most likely has something to say about that.

I Love the 80s
Once Illyana has grown to the point where she's a teenager, the one piece animal skin she's been wearing while in Limbo becomes a two piece outfit (and the cover to the fourth issue is another example of the fourteen-year-old Illyana being sexualized). 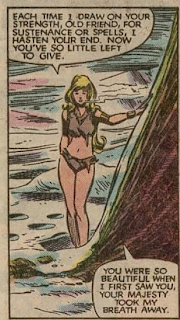 Claremontisms
The Dark Ones are referred, by Belasco and the narration, as his "dread masters" a few too many times.

Teebore's Take
This is actually the first time I've read this series. For whatever reason, during my frequent read-throughs of the X-titles when I was younger, I never made the effort to seek this out. The events it covers are largely superfluous: you don't need to read this series to know that Illyana grew up in Limbo, where she had her soul corrupted, learned sorcery and overthrew Belasco before returning to Earth; issues of X-Men and New Mutants prior to and following the publication of this series make all that clear. These four issues, then, are intended to flesh out the details of those plot points and deepen Illyana's character.

In that regard, it succeeds, though the details get a little repetitive and long-winded. Each issue effectively serves as a "___ trains Illyana" story before she comes into her own and defeats Belasco in the fourth issue, and Claremont's first person narration for Illyana as her expressing a lot of the the same things over and over again (she wants to please Belasco, but hates that she wants to at the same time). However, the material does stand out for just how dark it is. The one thing it makes clear is that for as much as Illyana may want to do good and cast off Belasco's influence, she will ultimately fail. He corrupted her soul moments after she arrived in Limbo, bonding her to him, and from that point forward, anything she does is tainted. Repetitive they may be, but scenes which depict her helping her friends while thinking how much she hates upsetting Belasco by doing so (or vice versa) are twisted and effective at depicting how shredded her soul is.

This, then, casts Illyana alongside Jean Grey, Claremont's heretofore most tragic character. In the end, Jean had to grapple with her own dark side, released by the corruptible influence of her vast power, ultimately succeeding long enough to sacrifice herself for the greater good. Unlike Jean, Illyana, as presented in this series, is ultimately setup to fail in any effort to overcome her dark side. Her soul has been corrupted beyond her ability to repair it, so much so than any attempts to do so are tainted and simply further the corruption. All she can do is hold out as long as possible, doing as much good as possible in the meantime. In the end, while this series in and of itself merely fills in some gaps, it positions Illyana to become one of the most fascinating and tragic characters of Claremont's tenure, one who is unable to do good without further corrupting her own soul.

Next Issue
The X-Men team up with a toy line in X-Men and the Micronauts, while New Mutants #14 picks up where this series leaves off.
Newer Post Older Post Home
Posted by Austin Gorton at 8:00 AM