The Simpsons: Mom's I'd Like to Forget
As is the norm these days, the first act was the strongest, with the 4th grade vs. 5th grade dodgeball tournament and ensuing rivalry. I particularly enjoyed Bart's vision of the West Side Story rumble and the Old West Saloon style brawl in the teacher's lounge, especially Skinner as the piano player trying to keep out of it. After that, we got a lot of halfhearted ideas and incomplete plots, from Bart being vaguely uncomfortable with the antics of the other boys to Marge kind of becoming a social butterfly to the whole "Homer doesn't get along with the other dads"bit, which was painfully unfunny. That Marge ultimately broke up with the "Cool Moms" because she sees the good in Bart was certainly true to her character, but it was an ending that everyone was expecting.

Bart: Ew, your sitting on the toilet!
Marge: When its closed its a chair.

Marge: We called ourselves the cool moms.
Bart: There’s nothing cooler than calling yourselves cool.

Lisa: Could we hurry this up? I am really uncomfortable being a girl in this store! 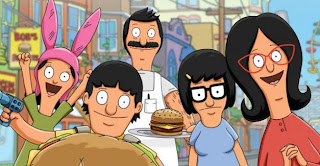 I'll give just about any animated show Fox decides to slot in between The Simpsons and Family Guy a shot (which is what they want I suppose, and is how I ended up watching The Cleveland Show). Mrs. Teebore was reluctant about this one (she doesn't care for the animation style) and we almost skipped it in its entirety, but I'd read some good things about it and figured we should check it out.

This first episode was...perfectly acceptable, I suppose. I didn't laugh much, but this is clearly a show more akin to the traditional sitcom and dry humor aesthetic of King of Hill than its other "Animation Domination" compatriots, and while I may not have laughed a lot, I was amused throughout. Basically, it was good enough that I'll keep watching (especially since the DVR makes it effortless to do so) but not so good (yet) that I'll be upset should Fox yank it from the schedule in a few weeks like most of the past efforts in this time slot. 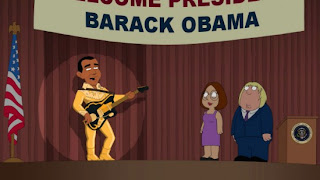 A surprisingly emotional episode that dialed back the random humor in favor of some legitimate character moments, from Brian's intention to sacrifice himself for Peter to Chris and Meg sharing credit for Meg's essay on hope. I was expecting some sort of "screw you Meg!" coda throughout, but it never came. Most of the funny stuff came at the beginning as a result of Peter's Red Bull fueled shenanigans, though I did enjoy the guys' commentary over the Charles in Charge opening credits (swap in other shows and its a gag I wouldn't mind seeing repeated) later in the episode. This isn't a show I watch to have my heart strings pulled, but a slightly-less manic episode now and then isn't a bad thing.

Stewie: Let’s go find the big black sassy nurse. There’s always one.
Sassy voice: You can cry about it, or you can decide to live.
Stewie: Found her!


How I Met Your Mother: Bad News
I was going to talk about this episode in the context of sitcoms turning dramatic, which is something of a sitcom tradition (and not just in terms of "very special episodes") and something that HIMYM itself has done, to a lesser and different degree, in the past (I'm thinking, for example, of Marshall and Lily's break-up at the end of season one and the palpable devastation emanating from Marshall as a jubilant Ted finds him sitting in the rain).

But it turns out just about every review of this episode out there is tackling that subject, so at the risk of sounding repetitive, let me just throw out a few quick thoughts:

I'm still not sure how I feel about a mostly-comedic episode (in intent, even if you didn't happen to find it all that funny (I did, for the most part)) taking a sharp turn to the dramatic at the end. Marshall's father dying at the end of an episode that featured Barney's half-Armenian, gynecological doppelganger is definitely a contrast between silly and somber, (an intentional one, I'm sure), but I'm still can't decide whether the episode earned it or not.

I do think that Jason Segel acted the hell out of the scene where Marshall learns about his dad, and it was devastating, and I will miss seeing Bill Fagerbakke (who will always be Dauber to me) on the show.

Oh, and apparently there was a Where's Waldo?-esque countdown hidden throughout the episode, which was counting down to Marshall learning about his dad's death (the titular "bad news"). I completely missed all evidence of said countdown, so I have no opinions on it (though clearly it wasn't that obtrusive, at least for this viewer; I suppose that's what I get for watching it while eating dinner...).


Modern Family: Slow Down Your Neighbors 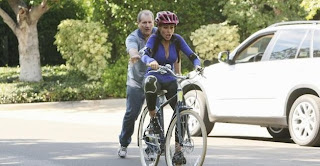 It's been said before that Luke is this show's secret weapon, and I thoroughly enjoyed both his contributions to this episode, between his hilariously random disdain towards the police and his tough love teaching with the Super Soaker. I also loved his aside to Gloria's fear of being grabbed on her bike ("that's weird").

Of the three main plots, my favorite was the Jay/Gloria/Manny bike riding one, mainly for Gloria's irrational fears. The Mitchell/Cam/Barry plot was odd, but as is usually the case with their plots, Mitchell and Cam sold it. I especially liked their reactions to the stranger in the hot tub at the very beginning ("You know everything I know") and Mitchell's snap judgment rant ("what country is he from, Pretentious-stan?").

The weakest of the three was the Phil/Claire bit, as it centered around spousal misunderstanding and a lack of communication, devolving into a standard sitcom trope (which this show does from time to time). As is usually the case with these kind of plots, a simple conversation between Phil and Claire would have solved the problem. But I always enjoy it when Phil tries to be deceptive, and the look Claire gave him as she sped away in the car at the end was priceless. Plus, it was nice to see Jamie Gertz getting some work (I still have an odd and unexplainable affection for Still Standing)

Jay: Two-thirds of my house can't do what a billion Chinese do

Phil: I wish I was one of those people who thrives on the danger of living a double life. You know, Bruce Wayne, Peter Parker... Hanna Montana 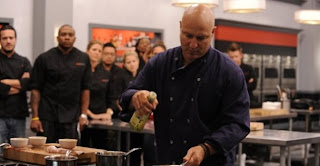 No, not Casey! I genuinely liked having her on the show (and not just because she's hot) and thought she'd last longer. By episode's end, it wasn't exactly shocking (as the editing of Judges' Table made it pretty clear she was going home) but it was still disappointing.

I realized last night that almost every episode this season, whomever gets eliminated leaves me disappointed and thinking "oh, I thought they'd last longer", which I attributed to the whole "All Star" thing. But then I realized that at almost every Judges' Table, there was somebody else who could have gone home without disappointing or shocking me, but didn't. So it's not just that this is an "All Star" season; like many episodes of Top Chef, there are still contestants sticking around longer than I'd like them to (in case you're wondering, this week Jamie was one the I would have cheered going home. But that's been true for a couple weeks now).

And I've been saying it for weeks, but the challenges this season have been awesome. The whole dim sum elimination challenge was pretty standard fare for Top Chef, but having Tom come in and set the bar for the quickfire? Brilliant. I loved how all the chefs were equal parts impressed and terrified as he blew through his dish. Also, I loved that Marcel took his fish, and that Tre gave him props for it. Usually, it seems like whatever Marcel does, someone criticizes him for it, whether he was being a dick or not.

Like some of the chefs, I thought perhaps the clusterfuck at the dim sum restaurant might result in something crazy like "no winner" occurring, but as is usually the case, the setting of the challenge itself largely took a back seat to whether the food was good or not. While seeing the guests fighting over food and the judges getting grumpy was uncomfortable, most of the chefs remembered that at the end of the day, those angry dim sum customers aren't sending them home or awarding them cars, the judges are. It was pretty clear that many of the chefs said "to hell with it" and focused on making their food as good as possible. Which turned the challenge into a mess, but was clearly the smart play.


The Big Bang Theory: The Bus Pants Utilization
Once again, the plot just ended when the episode did, with little resolution, but my real problem with this episode was Sheldon. I get that "Sheldon is a jerk" is one of his defining characteristics, but usually his jerkiness comes from a place of ignorance regarding hu-man culture, and as such, is forgiveable enough to be funny. Here, he was just an out-and-out jerk to everyone, insisting his ideas were automatically better for no other reason than they were his. Perhaps if the show had told us what some of his ideas were, we could have thought "oh, that wouldn't work but it's funny that Sheldon thinks so", or something. Instead, we weren't given an opportunity to either sympathize or laugh with Sheldon, and he came off throughout the episode as nothing more than an arrogant jerk.
Newer Post Older Post Home
Posted by Austin Gorton at 8:00 AM