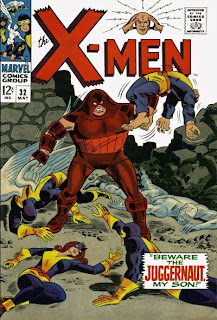 After saying goodnight to their dates, the X-Men return home to find the mansion dark and Cerebro smashed. Juggernaut attacks and, with the aid of Professor X's telepathy, easily defeats the team. Determined to bury the team alive in the mansion's basement, Juggernaut is contacted telepathically by the leader of Factor Three, who claims to have revived him earlier and entreats the villain to board a plan to Europe to join Factor Three. After Juggernaut leaves, the X-Men awaken but are unable to revive a comatose Xavier.

Firsts and Other Notables: The X-Men are celebrating Iceman's 18th birthday as the issue opens.

Though there is no official declaration of such, from this point forward Scott and Jean are essentially a couple. A flashback in Uncanny X-Men #138 will flesh out the moonlight walk in this issue, retroactively giving their relationship a proper beginning.

The first of the classic Lee/Kirby X-Men villains returns in the form of Juggernaut.

A Work in Progress: The mystery of the forbidden basement door: solved! After the police departed with the defeated Juggernaut back in issue #13, Xavier had him transferred to the mansion and kept hidden, in a comatose state, while  Xavier worked out a way to purge his brother of the Juggernaut's power. Incidentally, while the failure of Xavier's device to remove Juggernaut's powers is blamed on Factor Three, he never tries again... 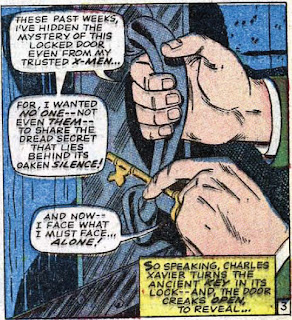 Factor Three resurfaces, working remotely to bring Juggernaut into their fold and seemingly knocking Xavier out of the picture in the process. 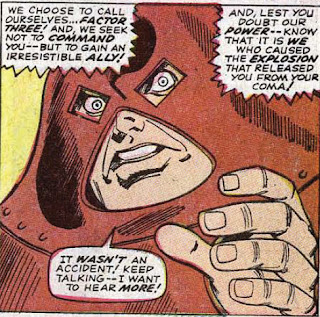 Xavier is effectively written out of the book for the next several issues, between being unconscious and then a prisoner of Factor Three.

Ah, the Silver Age: The Greenwich Village stuff is never better than this issue, with bikers storming Coffee-A-Go-Go and Bernard the Poet getting mocked for having rhyming lyrics. It's sheer lunacy, and absolutely brilliant.

Cyclops refers to the motorcycle gang as "refugees from a Brando film", aka "The Wild One". 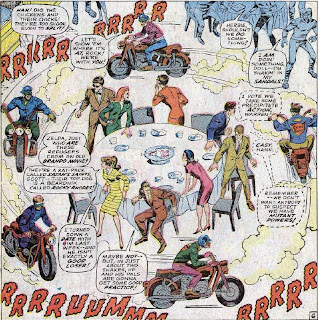 For some reason, Juggernaut pulls a Magneto, attacking the X-Men indirectly via booby traps and whatnot, including the old "lever that turns the staircase into a slide" chestnut. 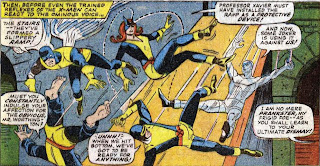 "Professor Xavier is a Jerk!": Step-brother or not, keeping Juggernaut, one of the X-Men's toughest adversaries to date, secretly locked in the basement for months was kind of a jerk move on Xavier's part. 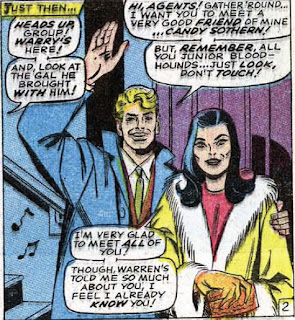 Scott and Jean dance together at the party, both worrying about the other. 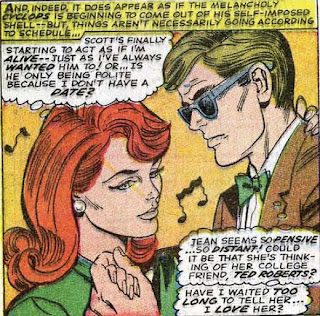 Later, they spend a romantic moonlight stroll dealing with Scott's angst about his power (whatta smoothie, right ladies?), but it does mark the beginning of their romantic relationship. 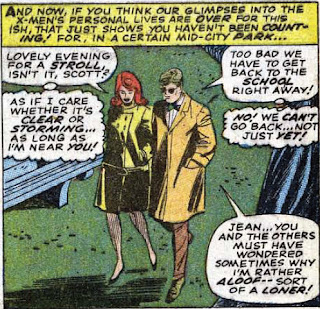 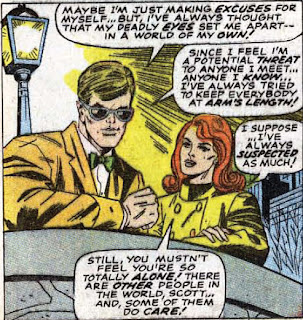 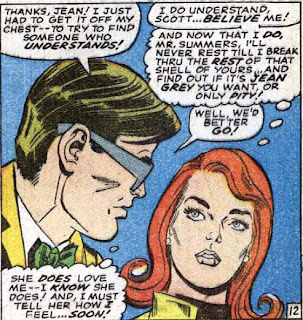 Iceman gets a goodnight kiss from Zelda. 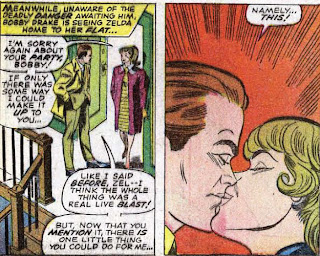 For Sale: Shamed by your English? 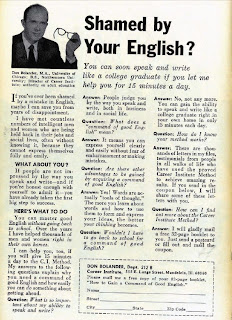 Teebore's Take: Comparing long form comics to pop music, acclaimed comic scribe Grant Morrison said that when he wrote X-Men he felt inclined to play certain "riffs", that is, to put his own spin on stories from the well-regarded and influential Chris Claremont/Dave Cockrum/John Byrne runs. Using that analogy, Roy Thomas, in this issue, riffs for the first time one of the core X-Men melodies laid down by Stan Lee and Jack Kirby by incorporating Juggernaut into the original Factor Three melody he is creating (other Lee/Kirby stories that get riffed most often through the years are Magneto, the Savage Land, aliens, and the Sentinels; just about every long term X-Men writer does a riff on one or more of those stories at some point).

As a result, this is one of the better issues of Thomas' run thus far. While as long in page count as previous issues, the story flies by, and little seems padded or tedious. There's a nice balance of action, characterization and retrospective Silver Age goofiness. While this run is more remembered for Thomas' apparent desire to be writing any other comic book aside from X-Men, his second, more widely acclaimed, run, with artist Neal Adams, will riff extensively on the work of Lee and Kirby. Those Thomas/Adams riffs will then inspire the early work of Chris Claremont and his collaborators, Dave Cockrum and John Byrne. This issue, then, serves as an enjoyable look at things to come as well as being a well done story in its own right.
Newer Post Older Post Home
Posted by Austin Gorton at 4:30 PM